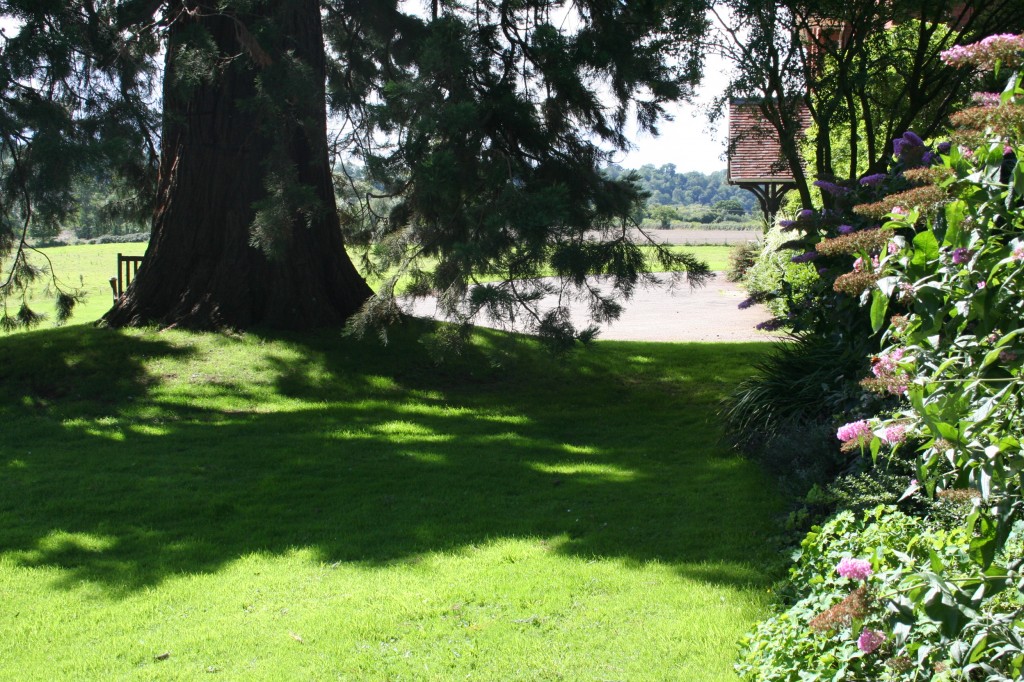 After the departure of Deb Dunning’s Holotropic Breathwork group, we’ve had a bit of a break and a chance to take a little time off.  Gail took a week away for a solitary retreat in mid-Wales, Hilary and her family headed to Scotland for her Mum’s 90th birthday and we had Mel’s brother and family to stay.  It was great fun having the family here.  Mel’s nephews, William, 10, and Oliver, 6, love their annual stay at “the big house” and it’s wonderful to know that this lovely old place will be woven into their childhood memories forever.  We had tennis on the lawn, archery in the walled garden, a barbeque one evening and they took trips out to Eastnor and Goodrich Castle’s and other local attractions.  They also helped us with some gardening one of the afternoons.  The boys loved being driven around in the back of the mower trailer and helping their dad with the fire. 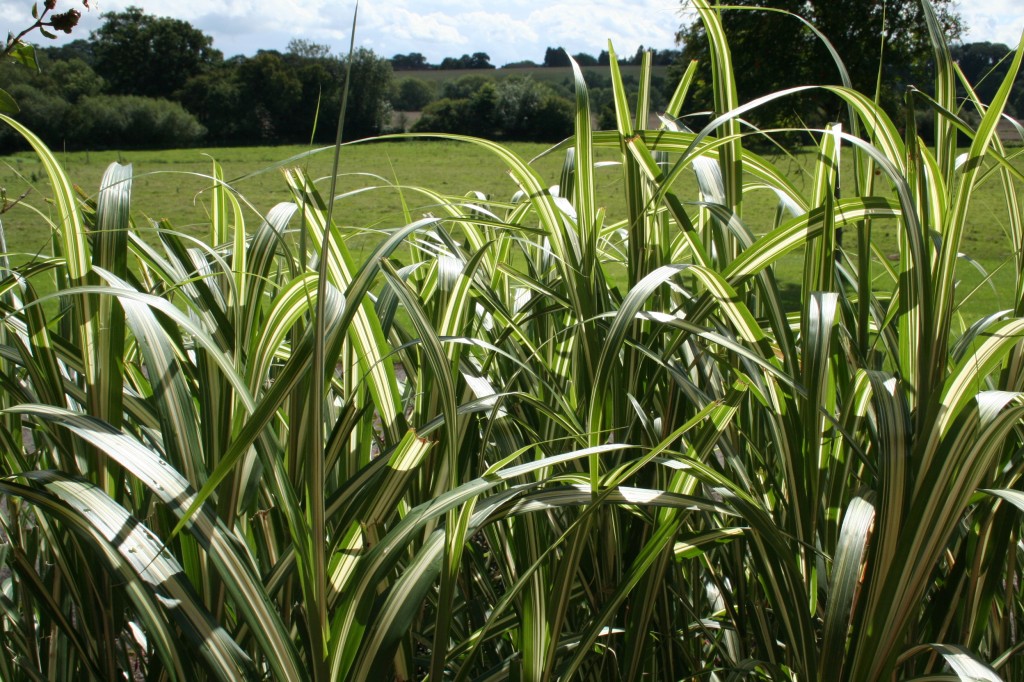 We’ve also had some time to catch up with various jobs. 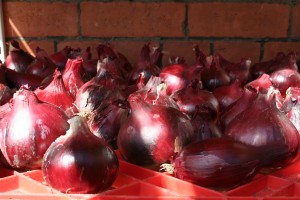 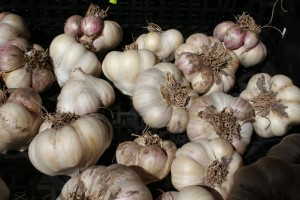 Gail has been sorting and drying our garlic and onions as well as going general tidying and weeding in the veg garden.  She is also keeping on top of all the harvesting of beans, mange tout, tomatoes and the prolific courgettes!  Mel & Steve have been finishing the blackcurrant harvest.  We now have enough in the freezer for next year but there are still loads on the bushes so we’re offering “pick your own” to the groups coming in now.  Gemma has made some jam from them too.  As we start getting windfall apples and pears, it will be time to pick those before long for puddings and our juice.  We’ve also picked the first plums from the tree on the tennis lawn.  They are delicious.

Last weekend we had a full house with Richard Farmer’s RDTC Living Summer Gathering (http://www.soulmoves.co.uk/classes.php).  Many old friends from our Tai Chi days but also some new faces to welcome to Poulstone.  Despite a power cut on Saturday night due to branches on a nearby power line (luckily most people had already turned in for the night!) and a deluge of rain, they had a great weekend.  Steve and Gemma have been trialing some new puddings and the group were treated to Chocolate Crusted Lemon Tart and White Chocolate Creme Brulee with a blackcurrant layer this weekend.  Yummeeee!

Following on from the rainy week we’ve had, Steve has been up ladders checking the flat rooves for repairs ahead of the winter.  He took this great shot of the back garden from high above the Ash bathroom – good job he has a good head for heights! 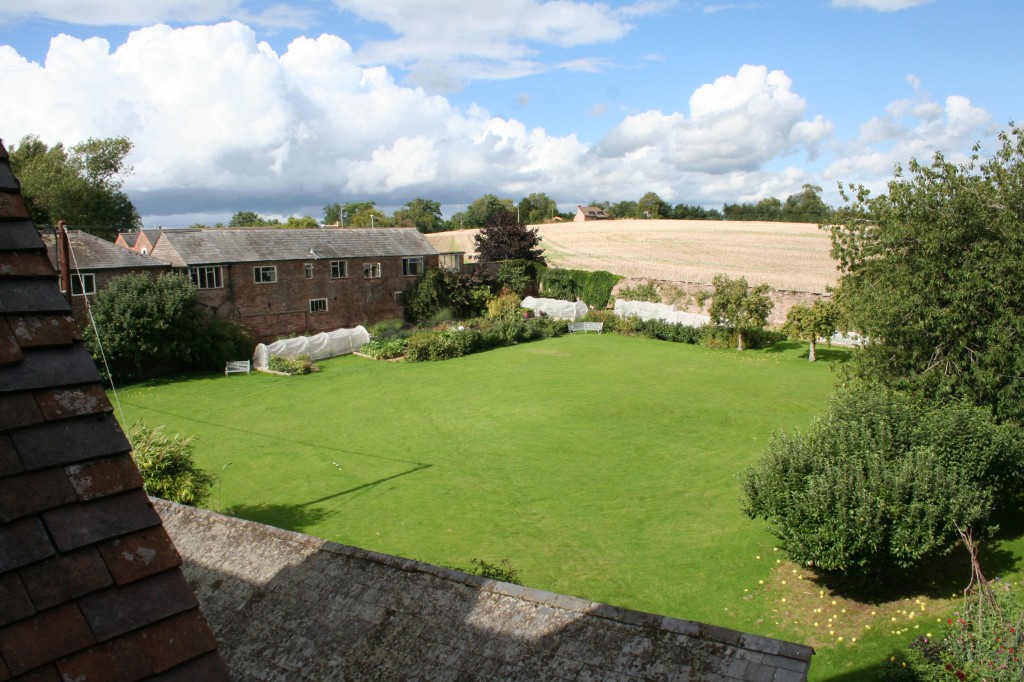 Today, Mel has been putting finishing touches to the house.  We don’t have a group in now until next Friday but we have some visitors looking round over the weekend so want to look our best!  All the rain has beautifully greened up the lawns which were getting pretty parched last month. 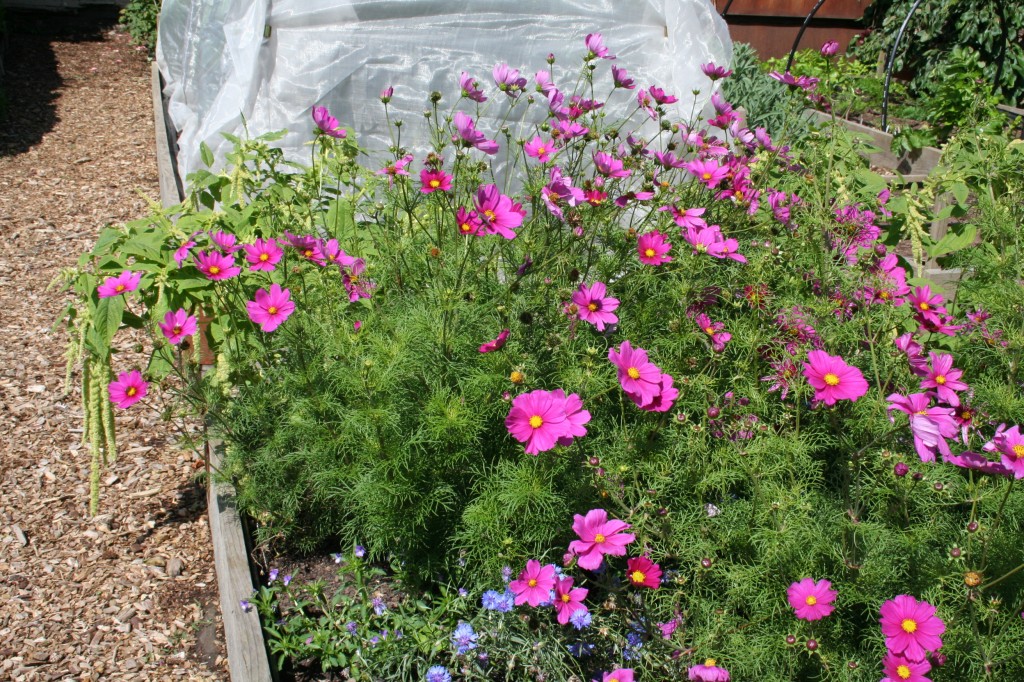 It’s a lovely sunny afternoon with fresh breezes and time to leave the office for a little cup of tea on the steps before the next round of office work, we think. 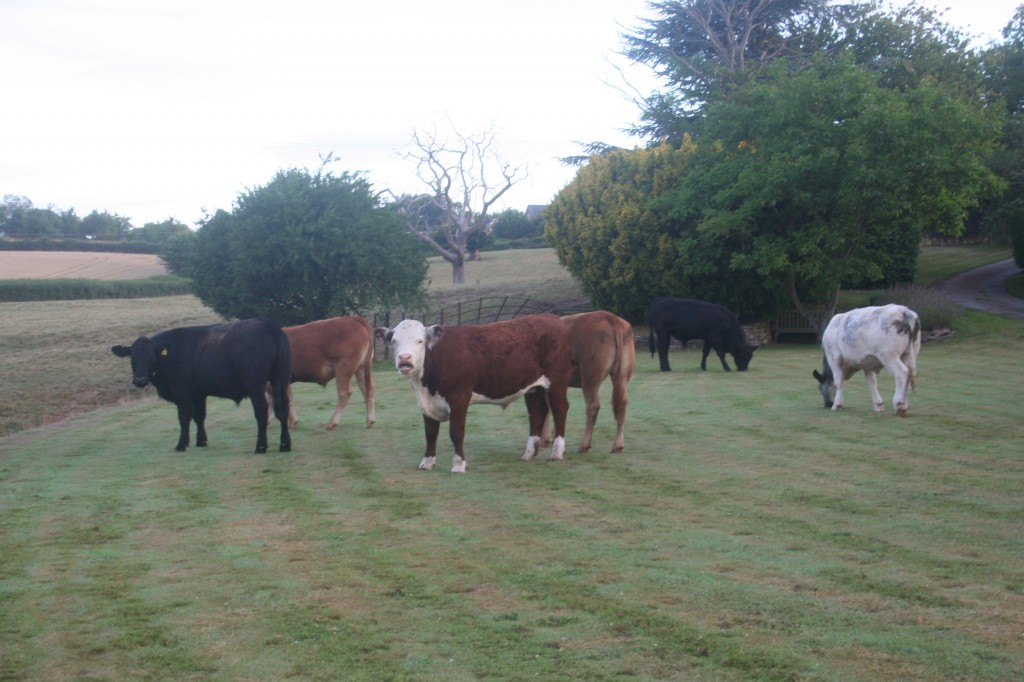 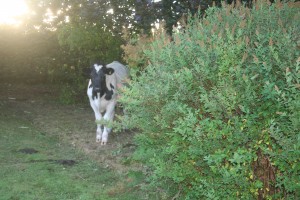 We looked out of our bedroom window at 6.00 a.m. last Thursday morning to find a herd of cattle from the meadow in our garden!  They weren’t easy to herd out again either!  Steve and Mel managed to get them back in the field in two groups with much flapping of arms and shoo-ing. The farmer has now repaired the metal fence so we are not expecting any more unannounced visitors but Steve then had to do some industrial strength pooper scooping before the Tai Chi group arrived!

It’s been a Tai Chi-ish kind of month this month.  We had Richard and Marigold Farmer’s group in at the beginning of the month and then Alec Jones’s Dragon Spring Tai Ji School here last weekend (http://www.dragonspringtaiji.co.uk/index.htm) who arrived with fans and walking sticks and other props for the various forms they practise. 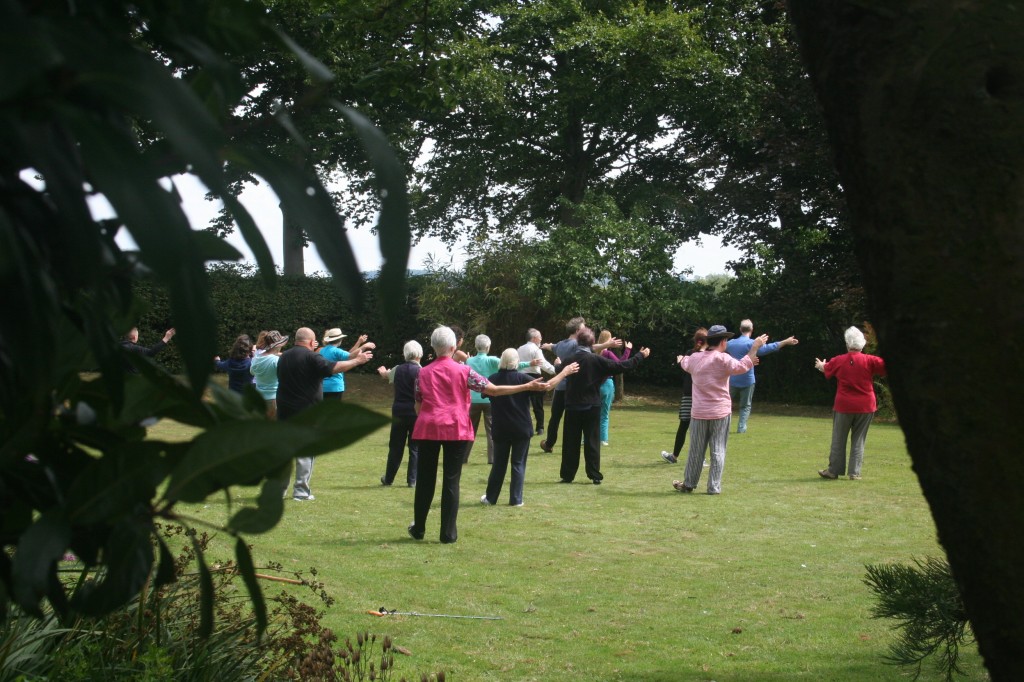 We greatly enjoyed their visit and there were lots of sunny days for working outside. Interestingly, Alec was doing an exercise about “the herd” so the events with the cattle wove into their workshop thematically – they say there is no such thing as an external event! 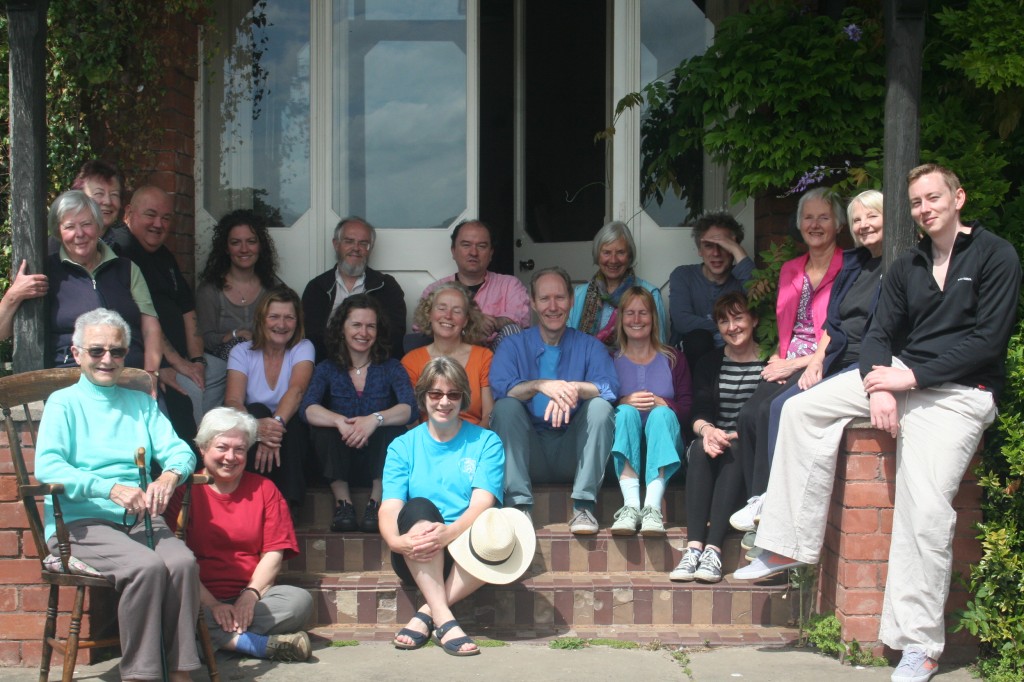 Between Tai Chi courses we also hosted the European Shadow Work Facilitators’ Guild (http://www.shadowwork.eu/index.php/component/easydiscuss/profile?Itemid=1) who have come here for the last couple of years for their annual gathering.  It’s a peer group and these guys have worked together over many years so there is always an immediate feeling of them being at home here when they arrive.  Easy chairs are wheeled into the group room and we always enjoy the friendly and warm atmosphere in the house.  We hope to see them again next year.

and Cait Branigan (http://spiritwarrior.ie/shamanism-cork-ireland/teachers/cait-branigan-house-clearing/) with their Freedom of the Soul retreat.  This retreat is a blend of Holotropic Breathwork and Celtic shamanism and we have had a great week together.  We were also delighted to see Marianne Murray again who is facilitating the breathwork sessions with Deb and Holly on this retreat.  Marianne brought the original Breathworks groups to Poulstone of which this course is a continuation.

Right!  That’s all for now!