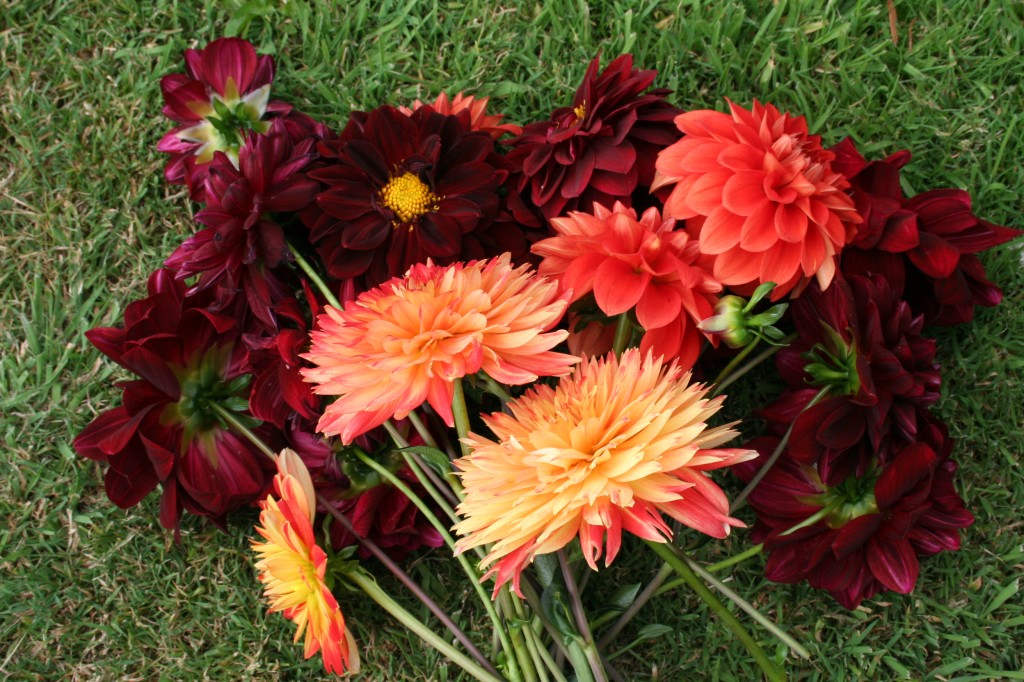 Well, we’ve just had a bit of time off between groups which has been nice and relaxing. Gemma and Mel put another 18kg of apples in the freezer last week and we will now begin boxing up the rest for storing and making juice. The squirrels have also been enjoying the fruit – unfortunately we could only get a grainy photo from a way off! 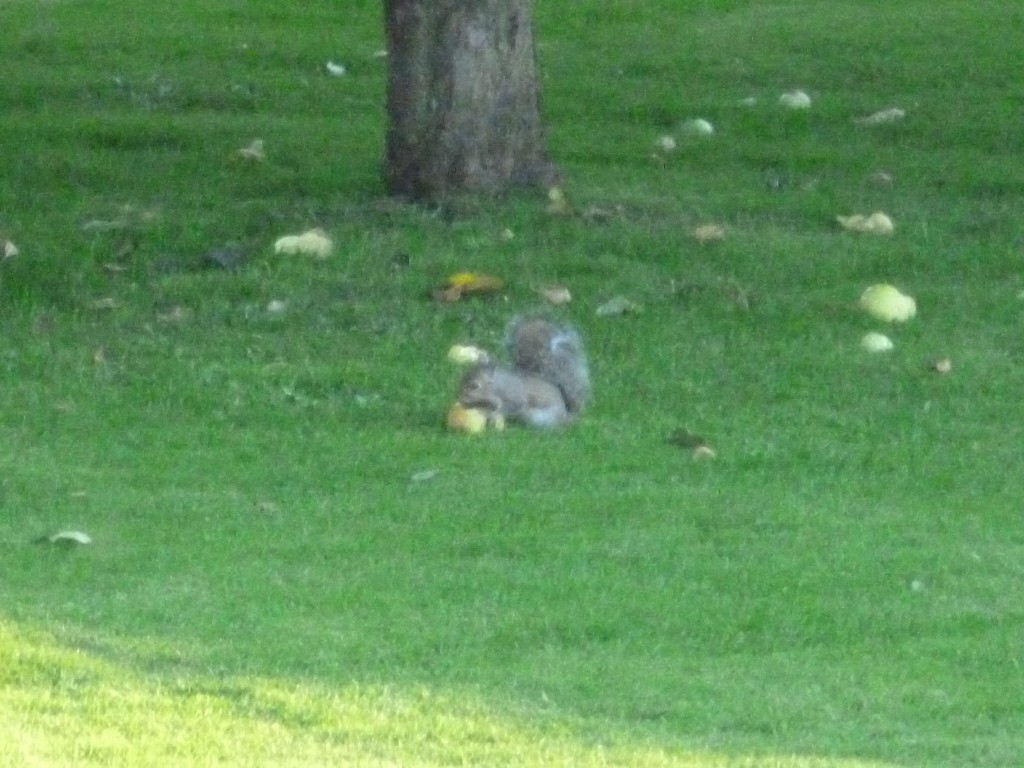 We had a huge fall of rain last night which has bashed a few things down but generally it’s is rather a relief for the garden. The mulberries are now ripe and need picking so we’ll try to get out there later in our wellies if the rain holds off. The dahlias and sweet peas are still in full swing and providing some welcome colour indoors on this grey, drizzly day.

We were joined last night by Richard and Marigold Farmer (http://www.tmwtraining.com/and http://www.soulmoves.co.uk/) with the first of their Giant Leap groups – always a pleasure to have so many Poulstone old-timers (or should that be long-timers not old??!) about the place doing this advanced course with Richard and Marigold. We hope the weather picks up for them so they can do some Tai Chi outside as well as in the barn. 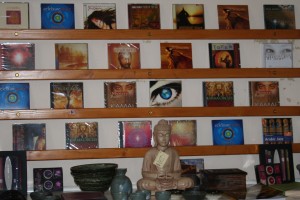 We’re just adding some stock to the shop today – more CDS, some new card designs from Anne Thomas and some more of Jenny Shutler’s wonderful re-purposed cutlery jewellery!! (http://www.numerous-aspects.co.uk/index.html). She makes lovely bracelets, earrings and pendants from vintage silver-plated spoons, knives and forks. They’ve been selling very well and we have just asked her to stock us back up again.  If you’re not coming to Poulstone soon but live in the area, you can catch Jenny at her stall at All Saints Cafe, Hereford from October 22nd – 25th (this is where we first met her and Steve cheekily asked her if she’d like to supply us!). 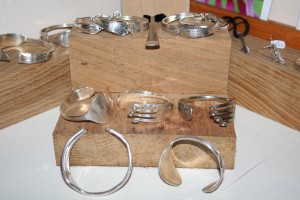 In the rainy weather, Steve is at home experimenting with some new recipes for the kitchen – most notably the rather wonderful mung bean dumpling in spicy tomato sauce! 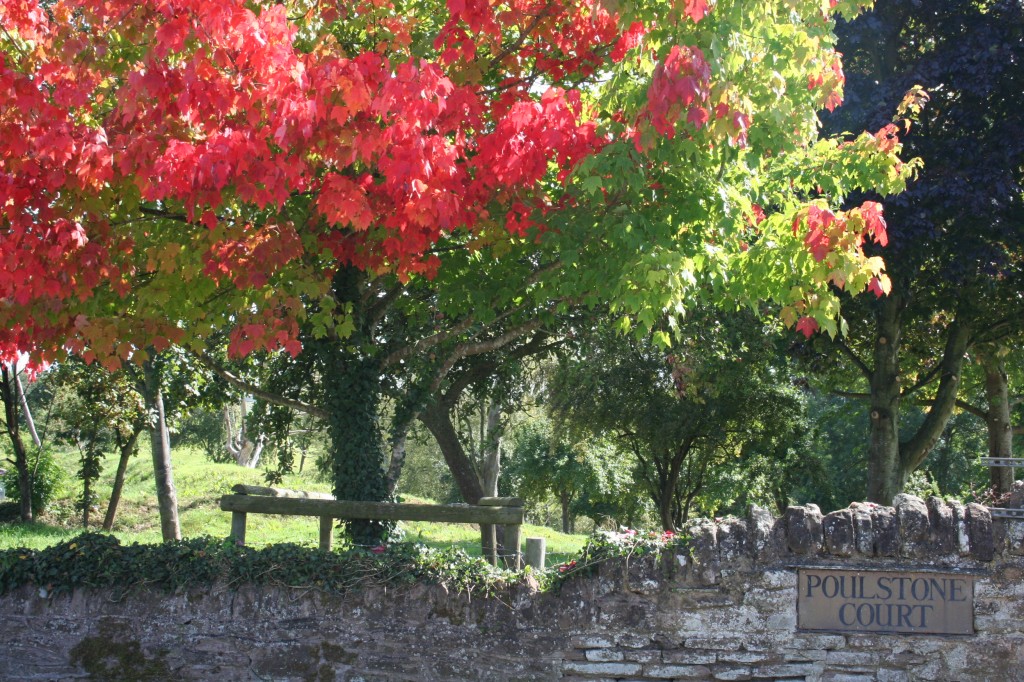 We have just said goodbye to Heather Mason and her group of yoga therapists. We very much enjoyed their stay and were pleased that they had such a lovely return to summer weather for their visit. We were very impressed that their work is geared towards helping people facing mental health issues such as depression and anxiety, and also specialised areas including work with young people with anorexia and those suffering from post-traumatic stress. They incorporate yoga and mindfulness training with insight from neuroscience and psychotherapy and psychology.  For more information about their valuable work, visit their site at http://www.yogaforthemind.info/about-us/introduction.html. 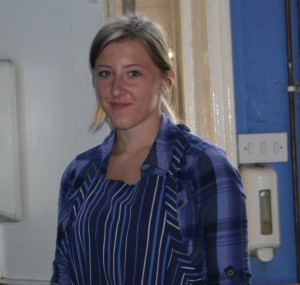 We also said farewell yesterday to Alanah who has been with us for two years, helping in the kitchen whilst studying for her A-levels. We’ve really enjoyed having her on the staff team and watching her grow in confidence over her time here. After lots of hard work and dedication, she has just achieved her grades to go to Exeter University to become a radiographer. Due to being camera-shy, she never made it into our staff gallery on the website but we did manage to snatch a quick photo in the kitchen for the blog! We wish her very well for her new university career!

It’s a glorious hot sunny afternoon here at Poulstone and the cleaning and bed-making are in full swing. The leaves are just beginning to turn in the garden but the maple at the top of the drive is already a stunning red  blaze (see above)! After a lazy post-group morning, we’ll be out in the garden picking peas, beans and tomatoes and doing a bit of dead-heading to keep the roses in good shape. 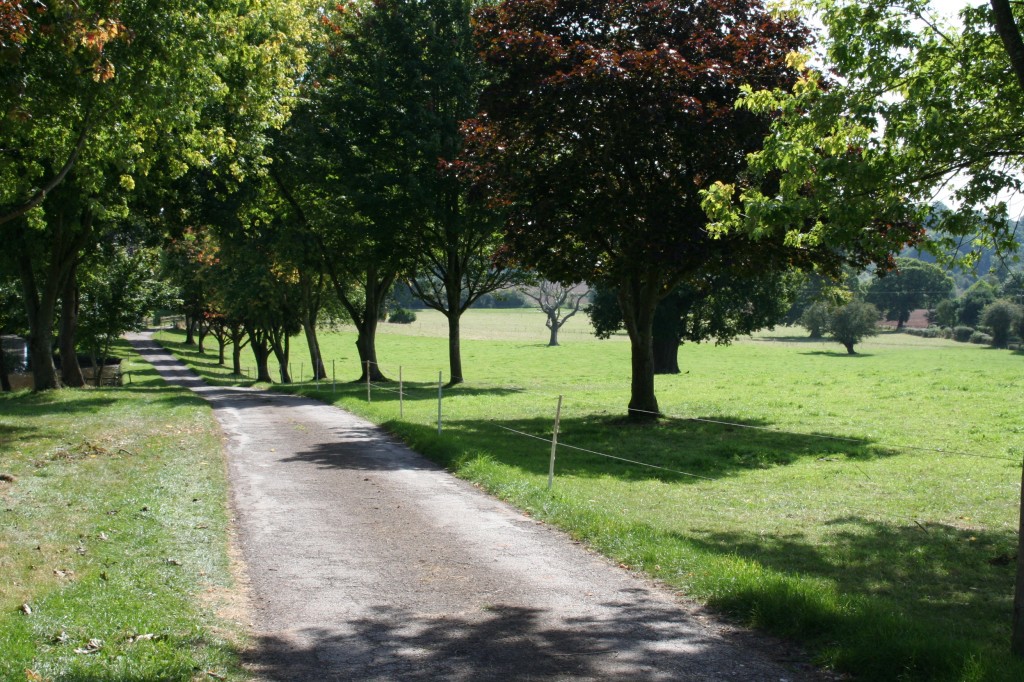 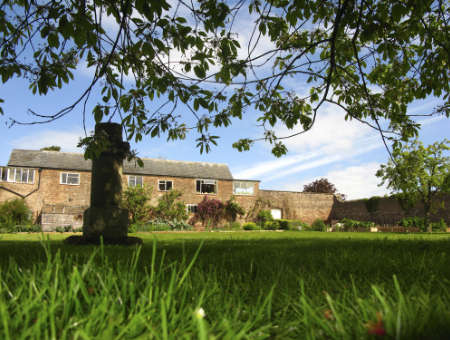 Great excitement this morning as we saw, from the Bothy windows, a heron sitting on top of one of the fir trees by the tennis lawn!  (Where is the camera when you need it??)! This huge bird perched weightlessly on the uppermost branches of the tree and then took off and glided into the cover of the beech trees. They are so easily disturbed by human activity even down by the river bank so it feels like a great honour to have them around in the garden! What a great start to the day!

Today we are preparing the house for Heather Mason’s yoga teachers’ group arriving tomorrow. Heather is one of the founders of the Minded Institute (http://www.yogaforthemind.info/) and we are delighted to have her back with us after her first visit in 2012.

We have had a couple of groups in since last writing. A fortnight ago we welcomed Judge Choudhry and Michelle Falcone of Heart2Heart Events with their Heart Awakening Experience. This is the start of a series of events they will be running at Poulstone and the students were brimming with enthusiasm for the work as we chatted to them in the shop on the last day. Many of the group we had met from some of Christian Pankhurst’s workshops here too so it was very nice to welcome them back. Keep an eye on our Courses page for more information about their work.

Last weekend we welcomed the Summer Gathering led by Richard Farmer and his teaching team. Richard has led Summer Gathering events at Poulstone for many, many years originally for his Rising Dragon Tai Chi School students.  This new incarnation is open to old RDTC students, to students of Soul Moves (http://www.soulmoves.co.uk/soulmoves.php) and his newer work, Tai Chi Movements for Well-being (http://www.tmwtraining.com/). The TMW training is bringing the benefits of Tai Chi to the NHS and healthcare organisations in the UK and Europe. It was wonderful to see people spanning almost the entire length of Richard’s teaching career working with Tai Chi in different ways and enjoying some of their classes out on the tennis lawn in the late summer sunshine. Wonderful! 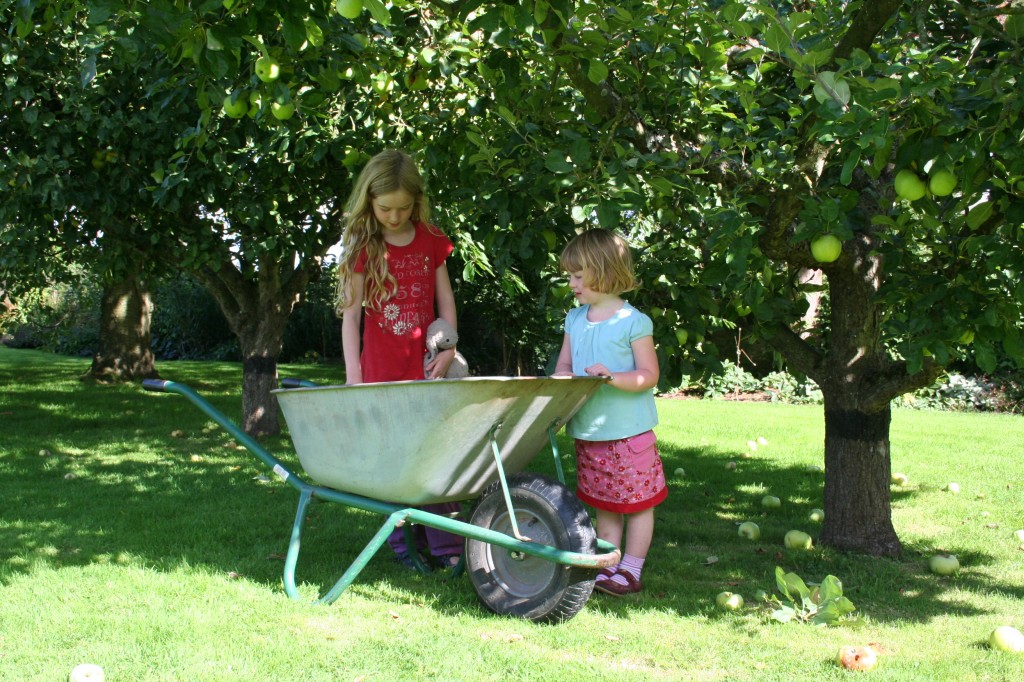 In between the comings and goings, we have been collecting all the windfall apples and peeling, coring and blanching them for the freezer for puddings in the colder months. We had a couple of little helpers on Monday, when our friend Vicki, fresh from the Summer Gathering, brought her grand-daughters Freya and Isla over to show them where grandma comes for her courses. Isla, only 3, was the perfect height for collecting under the smaller trees!  Thank you, girls! We also played a great game of hide and seek and musical chairs in the walled garden!

Yesterday, Gail, Mel and Steve had fun spending the afternoon and early evening, preparing the two barrows of apples. We were rather pleased with ourselves as we slipped 33 3/4 kgs of apples into the freezer!! 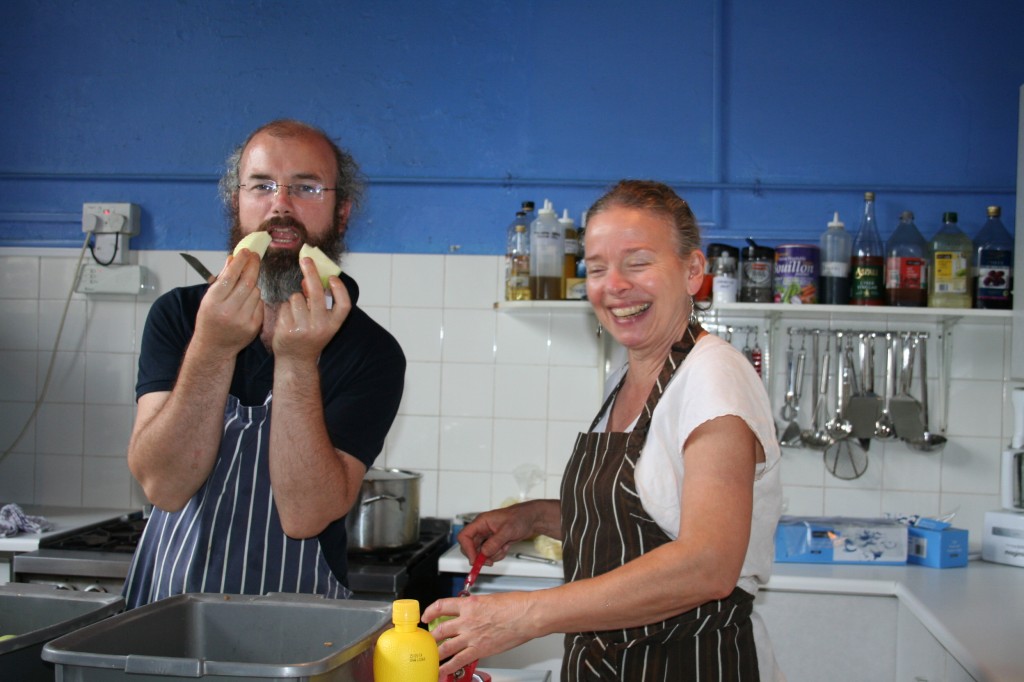 Today, after the housekeeping and mowing, we are going to make gooseberry & ginger, and blackcurrant jam!  Yum!

Right, time to get on with some office work!

More soon! Don’t forget to look out for the herons if you’re here in the next few weeks!