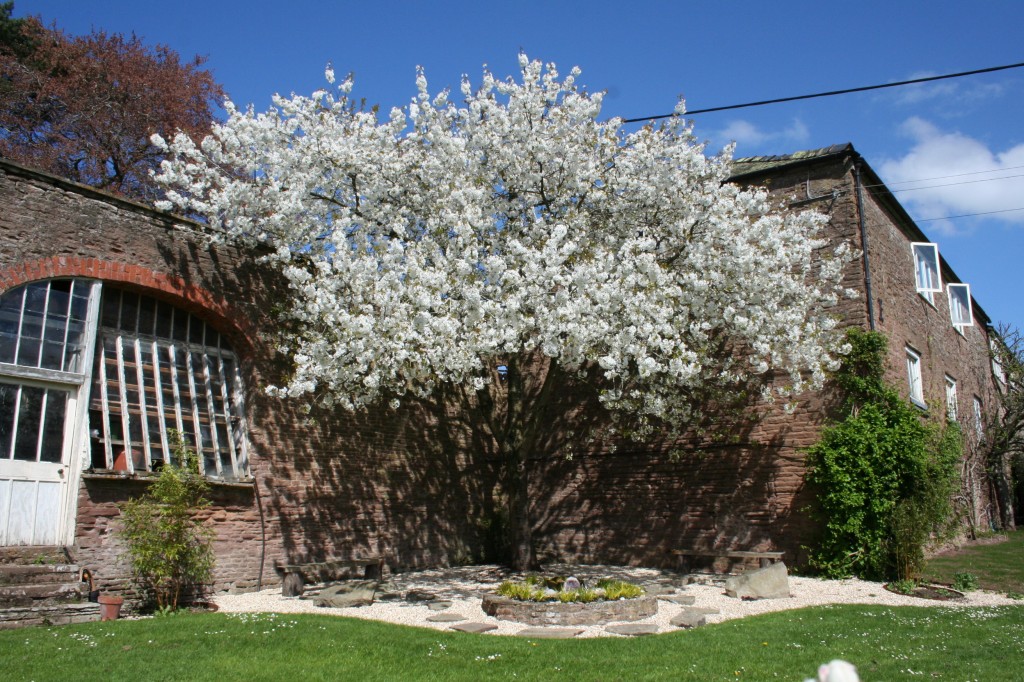 Still enjoying the Spring weather and all the cherry, plum and pear blossom is starting to come out in the garden. Lovely and bright and fresh.  The cherry tree in the Japanese-inspired garden we made last year is looking particularly good.  And the pheasant eye daffodils around the small apple trees are also looking beautiful and smell gorgeous.  We went out last night at dusk for a wander round the garden and walked into the walled garden to waves of beautiful scent.  The last light in the sky was picking out their pale petals against the dusk.  Magical.  All the tulips are beginning to come out in the long border and the round bed near the back porch too. Everything feels like it’s coming alive! 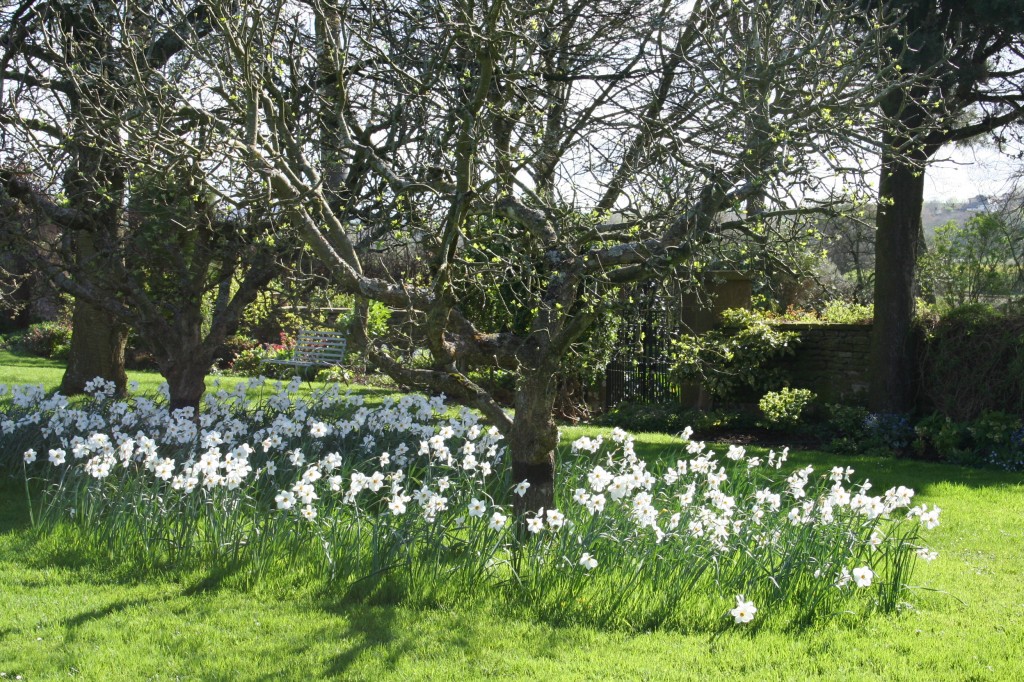 Gail and Mel have been planting potatoes this week and preparing some of the other beds ready for seedlings we’re bringing on indoors.  Mice have had their wicked way with our courgette and squash seeds, so we re-sowed them last night in slightly more protected circumstances on a trestle table they won’t be able to climb (we hope)!! 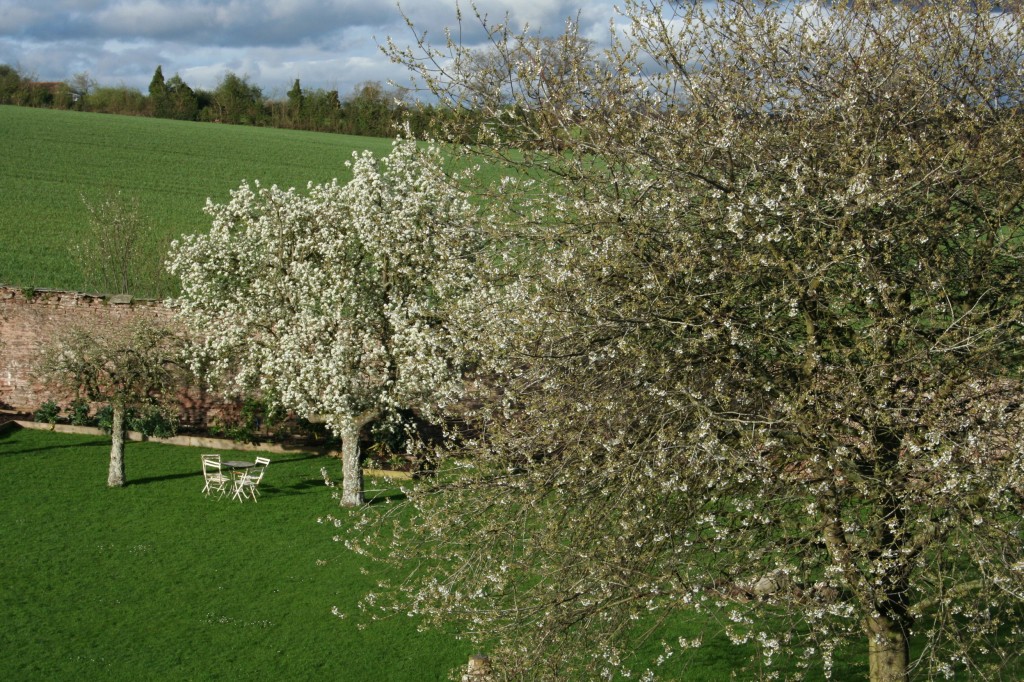 Following on from Burgs’ introductory course last week, we were joined by Manda Scott this weekend, again for an introductory course, this time in shamanism (www.mandascott.co.uk). It was very nice to have so many new people arriving at Poulstone over the last week or so and from their enthusiasm for the courses they took, we expect to be welcoming them here again before too long.  Burgs (www.theartofmeditation.org) is back in again from today for a Towards Samadhi retreat for advanced students which will take us right up to Easter.  We have the Easter weekend off before our Freefall writing course returns for its annual residential starting Easter Monday (www.freefallwriting.com).

That’s about all for now.  Enjoy the sunshine! 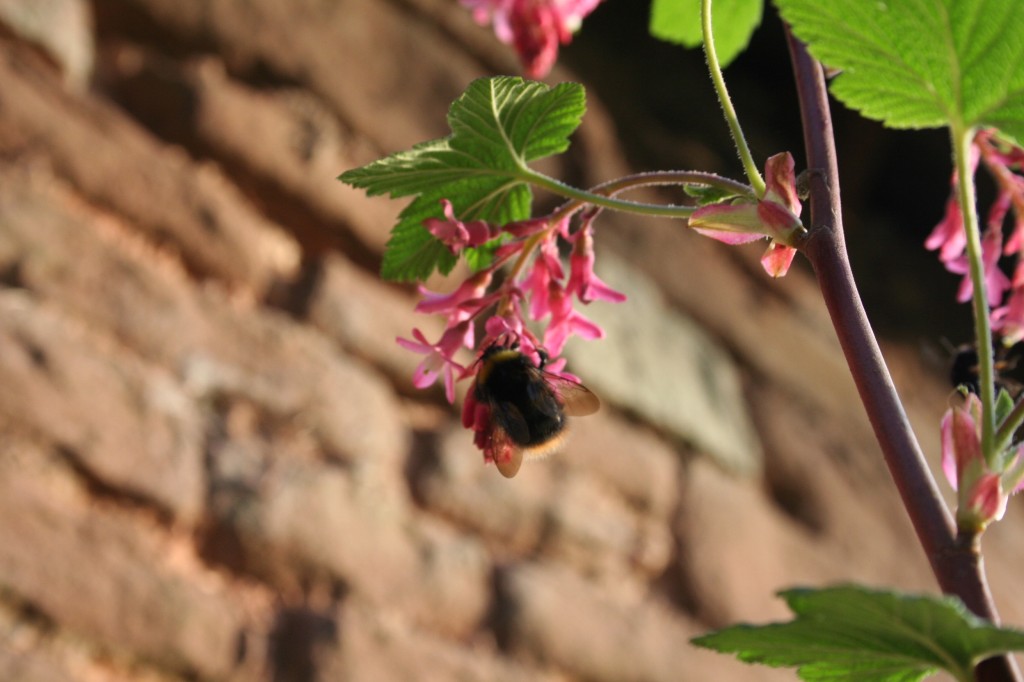 Well, we’re intermittently basking in Spring sunshine between the odd thunder storm.  Last Friday afternoon as the group was coming in we had thunder rattling the sash windows in their casements and a hailstorm, which then gave way to the most blissful weekend of Spring sunshine!  We’re all getting drawn into the garden.  Mel has finished tidying the kitchen yard and planted up some baskets and tubs with edible flowers which we use to decorate our salads at lunchtimes.  It’s nice to have a splash of colour out there after the winter gloom.  The little faces of the violas are particularly lovely. 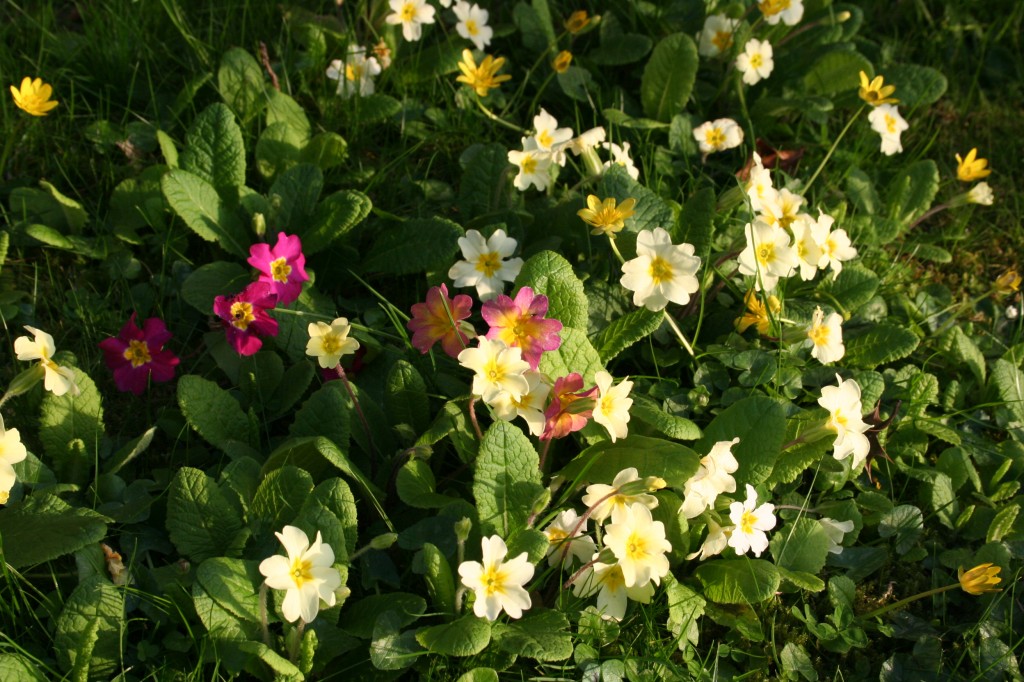 Steve and Dave have finally admitted defeat in their battle against the invasive plants in the flower bed under the barn and abandoned the ideas for a new planting scheme there. Despite the best efforts of Ian and others on the work retreat last year, the plants have come up as strongly as ever so we’re going with that and instead  have grassed it over to provide a pleasant sitting area under the apple blossom in springtime.  In the autumn we will plant some spring bulbs to come up around the bench that will go there. 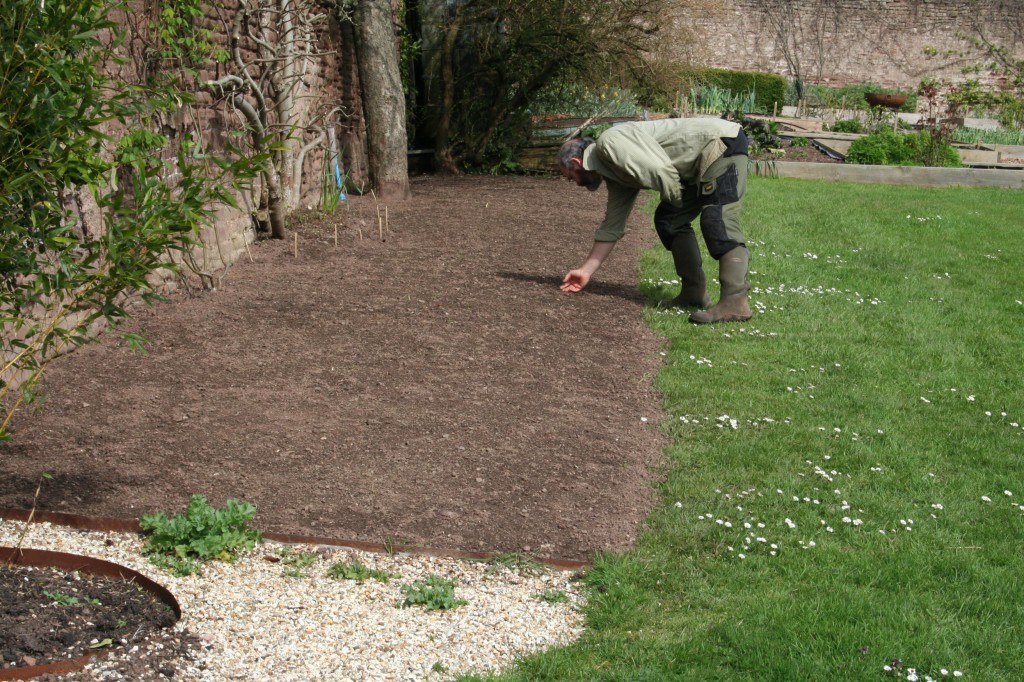 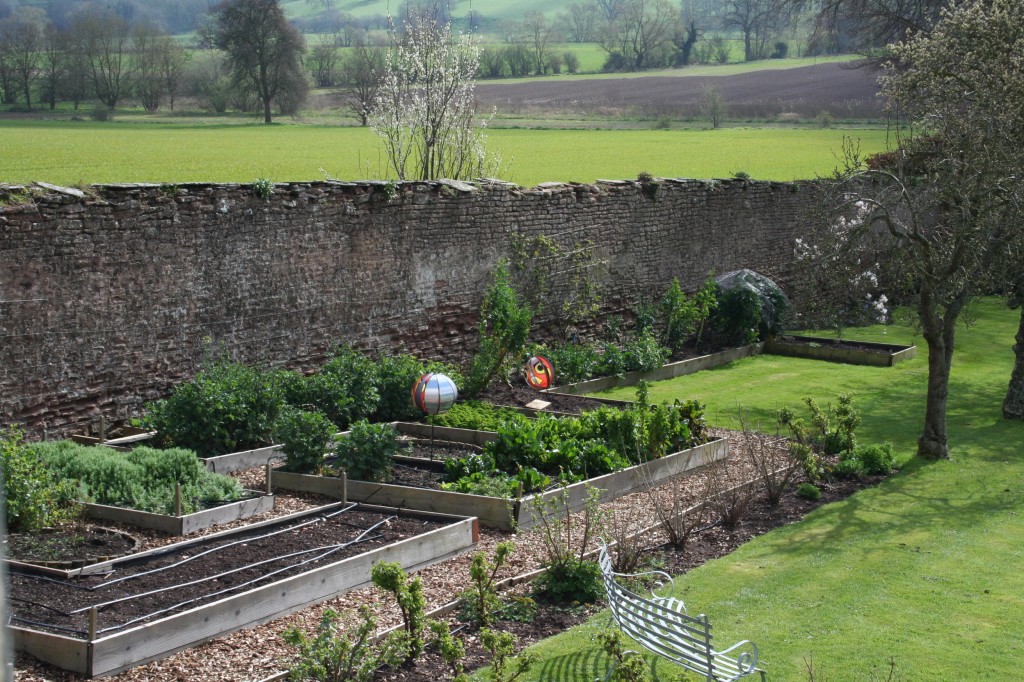 Mel & Steve have been weeding in the veg garden ready for planting and Gail’s been busy moving muck and compost up onto the raised beds.  Mel’s just off to sow her courgette and squash seeds in the potting shed once her stint in the office is over for the day.

Mel’s also been busy with the year end stocktake so anything not actually moving has been counted!  She finished in the shop today and has placed an order for some of the popular Japanese bowls that some of you were asking about earlier in the year.  They’ll be in soon!  We’re also featuring some new cards by the talented artist Anne Thomas.  Hilary first came across her work and told us about it.  We particularly like her nature mandala cards which are now in stock here.  Here are some examples and her website for buying direct is: http://www.shiningedge.co.uk/.

We’re on our third group since last writing.  We had a very lovely yoga group in two weekends ago with teacher Rowena Harris (http://www.herefordshireyoga.co.uk/rowena-harris) who lives nearby in Longtown in the Black Mountains.  Rowena hadn’t been with us for a few years and so it was nice to be reminded by her and the students of all the changes that have taken place in the house and gardens since that time.  A week later we were joined by Chris Luttichau and an advanced shamanic group.  We had met Chris when he taught here with Manda Scott a year or so back and it was really great to have him return here with his own students.  We very much hope we can host them again at some time in the future.  Chris’s website is http://www.northerndrum.com. We now have Burgs in with an introductory meditation retreat till Friday (http://theartofmeditation.org/).  In between the meditation sessions and discourses, there’s been some lovely weather for sitting quietly outside and letting the work settle.