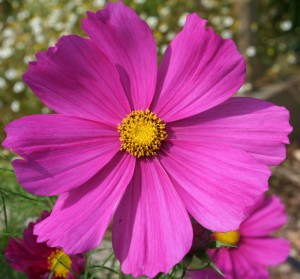 We’re having a last little burst of summer sunshine here before the autumn sets in properly.  This month we’ve had a seven day silent meditation retreat here with Burgs and a Tai Chi-based long weekend with Richard & Marigold Farmer.  Both groups were blessed with some lovely, warm sunny days and were able to do exercises outside and enjoy being in the gardens. 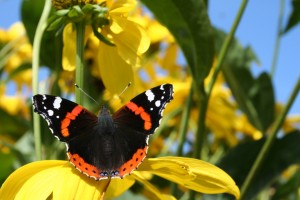 There’s still a fair bit of colour in the garden, most notably the yellows, oranges and pinks in the circular bed by the box hedges, the sweetpeas and cosmos.  We’ve just noticed that more butterflies seem to be belatedly appearing as the rainy weather has taken a short break, and they are especially enjoying the last remaining buddleia flowers.

The wildlife is so abundant here.  We’ve had the pleasure of encountering a few hedgehogs recently around the place at dusk and we also managed to get a sighting of the kestrel that is spending its nights tucked up in the recesses of the front porch.  The swallows and martins are all intensifying their flying activities during the day ready for their migration.  Flying school is in full swing and it’s a delight to see them all lined up along the guttering outside our kitchen window preening their feathers before swooping away for another practice run!  All rather wonderful! 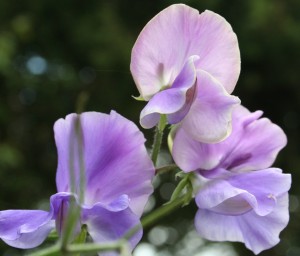 We now have Jonathan Horwitz’s shamanic group in for the week.  Each marvellously sunny morning this week, while we were doing our morning practice at home, we were treated to the lilting, magical sound of Jonathan playing his flute in the garden.

A beautiful start to the day x 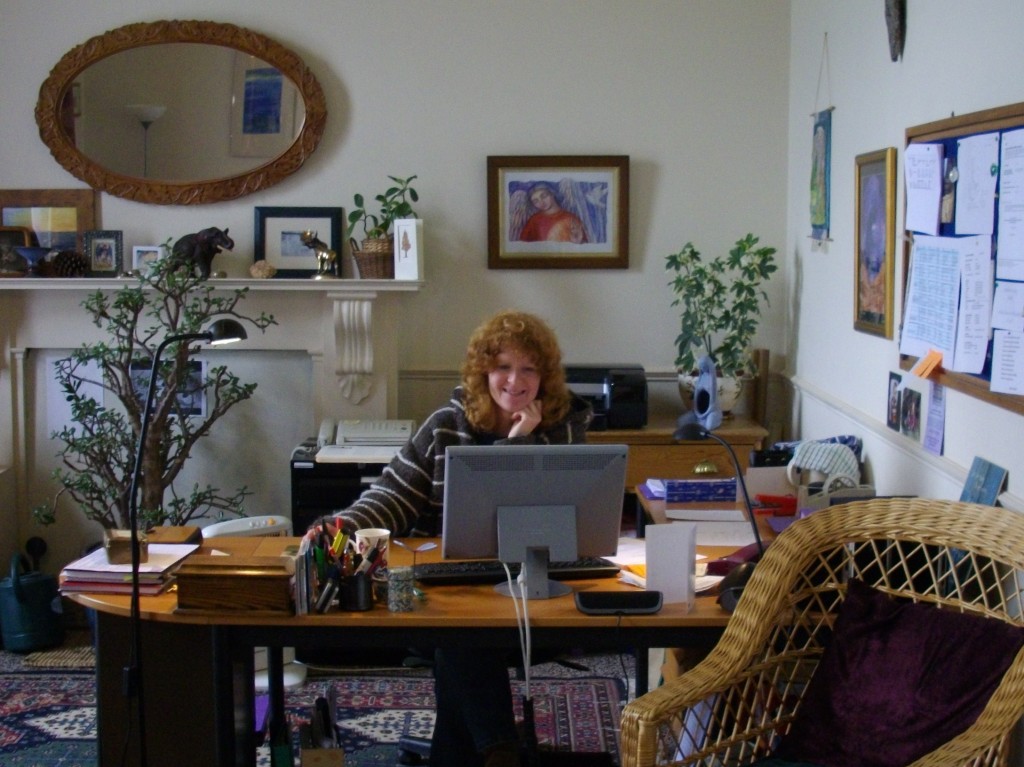 We’re getting asked by some groups about why we’ve switched off our any-time Wi-fi connection.  There’s a bit of a story behind it….

A while ago a friend asked us to take a device which measures electromagnetic fields to a property he was interested in buying.  It had large electricity pylons nearby and he wanted to know if their field was within the boundary of the property.  To our surprise the field emanating from the pylons was well within what the device showed as a “safe zone”.  We wandered around the garden and as we passed by the front door of the house itself, we hit a very high reading and asked if there was an underground cable there.  The owner said there wasn’t but commented that his wife was using their broadband connection in the room adjacent to the front door and he wondered if it was that.

Anyway, we concluded our visit and when we got home we were curious to do some readings in the office.  The results were horrifying!  Most places in the office were in the “caution zone” which means the electromagnetic field is getting higher than you might wish to be in.  And this was also true in other areas where the Wi-fi could be picked up which included the meditation/group room.  However, when we took readings by the broadband router, the cordless phone base and the wireless keyboard and mouse, all these readings were in what was shown as the “danger zone”.  Needless to say, these were all on or around Mel’s desk.

So what? you might be thinking.  Well, as an experiment, we switched off the wireless connection and replaced the phone, mouse and keyboard with wired versions.  The readings returned to the “safe zone”.  What clinched it for us, however, was the fact that after the first full day in the office with the changes, Mel felt so much better than she usually would after a day in the office.  She felt mentally more alert and without the sort of dragging tiredness she’d been feeling that she’d been putting down just to doing computer screen work (and to getting older!).  And the room felt less heavy somehow.  Anyway, after a couple of weeks, she was feeling like she had so much more energy and that mentally she was less scattered and stressed.  We turned the Wi-fi back on to see what difference it made and we could instantly feel a sort of irritation and pressure on our heads.  Mel hadn’t been able to feel this before so we felt that it is possible to become numbed to these vibrations and that when given a rest from them, our ability to feel more sensitively returns.

Some friends we have told about it have said they felt better having turned the Wi-fi off and returned to corded phones.  Anyway, we’re not expecting people to take our word for it but just saying why not try living without these things in your home for a while and see if it makes any difference to how you feel?  If you prefer to see for yourself what the electromagnetic field readings are, you can easily purchase an electromagnetic field meter online.  Why not try at least turning the broadband router off at night when your body is trying to rest.  Obviously, we’re none of us in control of electromagnetic fields emanating from outside our homes, but we can at least reduce what we’re exposed to at home.

Some people may think our experiences are unfounded, and we’re not on a crusade to convince people or interested in engaging in any great debate about it, but what we’re saying is no-one has anything to lose from seeing whether they feel better having given themselves a rest from wireless devices and cordless phones for a while.

PS For people visiting Poulstone, we have ethernet cable and USB port cable for internet connection at any time.  For those with completely wireless devices, we are happy to turn the Wi-fi on for agreed periods of time. 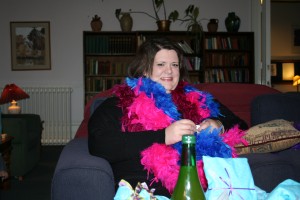 Well, our dear Charmaine has finally fledged the Poulstone nest!  We shall really miss her, for her lovely nature as much as her hard work and support in the kitchen and house.  We gave her a good send-off – she had always wanted an ABBA-themed birthday party so we gave her a surprise ABBA-themed leaving do!  This involved quite a lot of spangly jumpsuits and dodgy wigs (it was quite scary seeing Steve with hair after all these years!) and a ridiculously bad dance routine to Money, Money, Money!  It was a huge amount of fun! 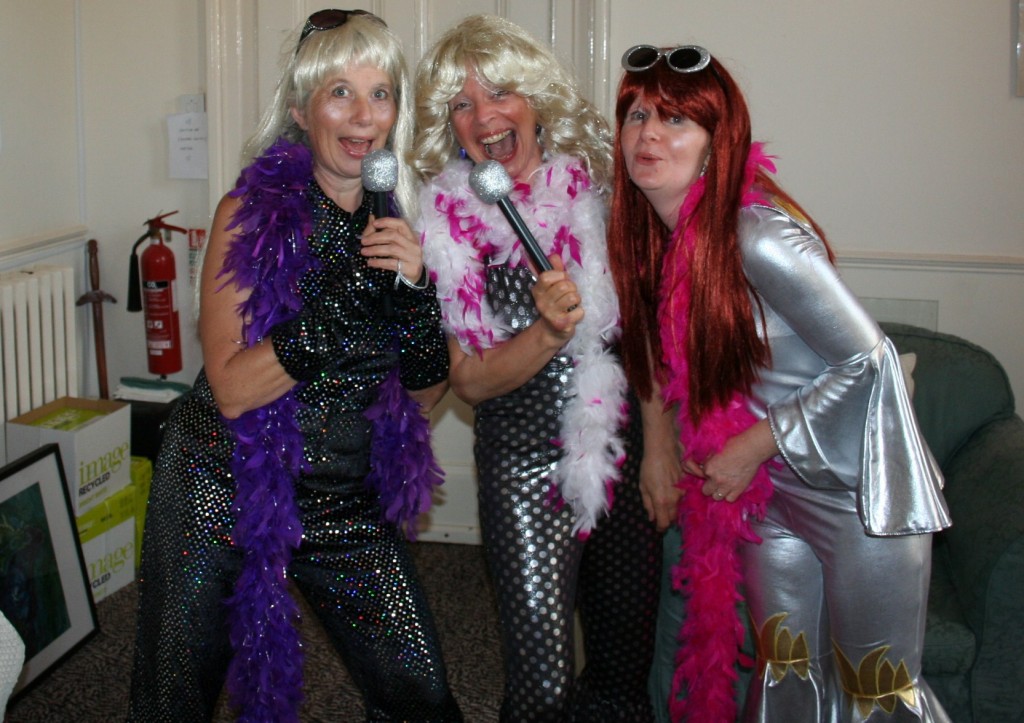 We hope that all goes well in her new job as a home care worker.  We’ve watched her grow in confidence over the years and we know that those of you who have chatted to her and got to know her a little bit on your visits to Poulstone all helped her to get more confident with people. 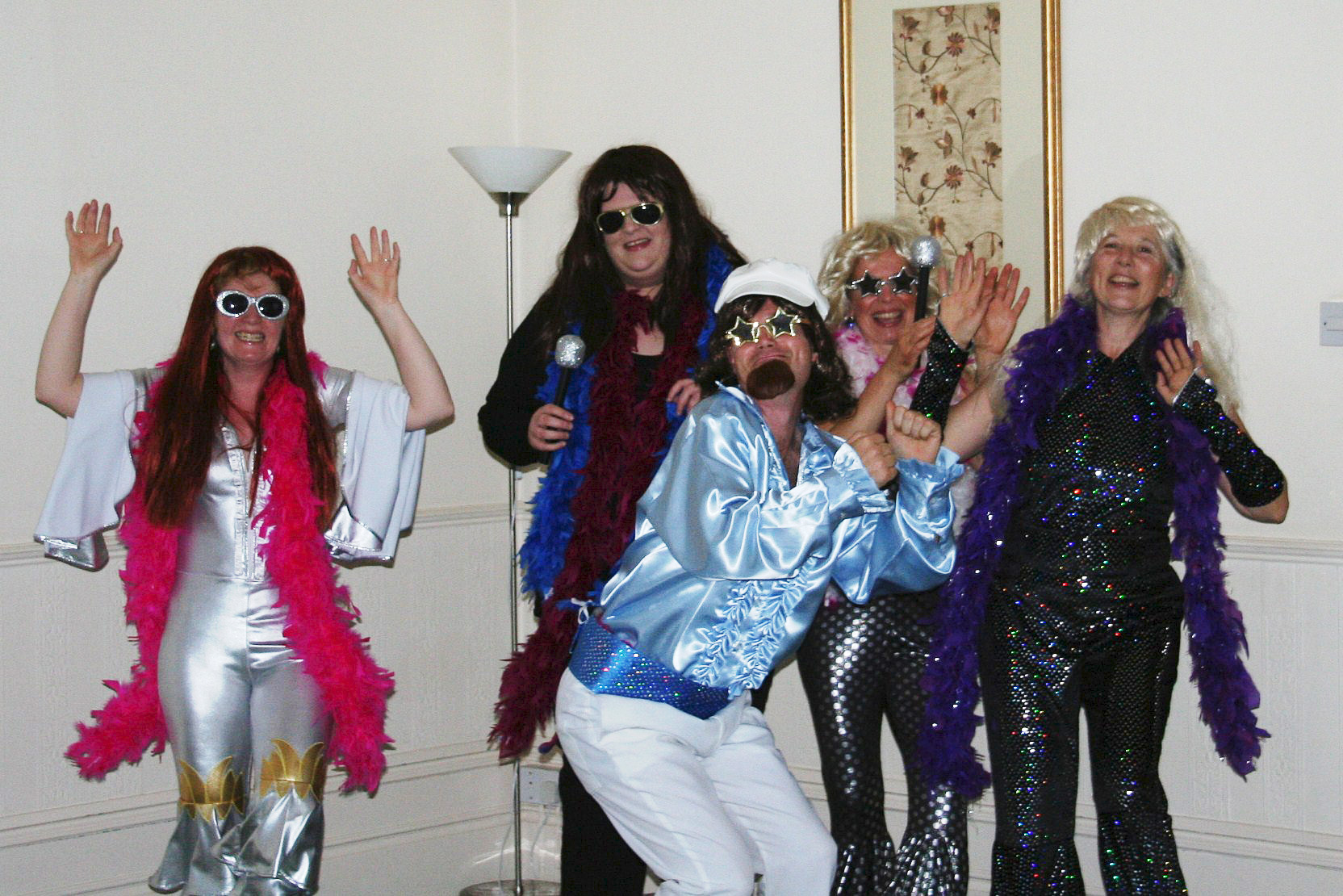 So good luck, Charmie!  We love you lots and will miss you xx