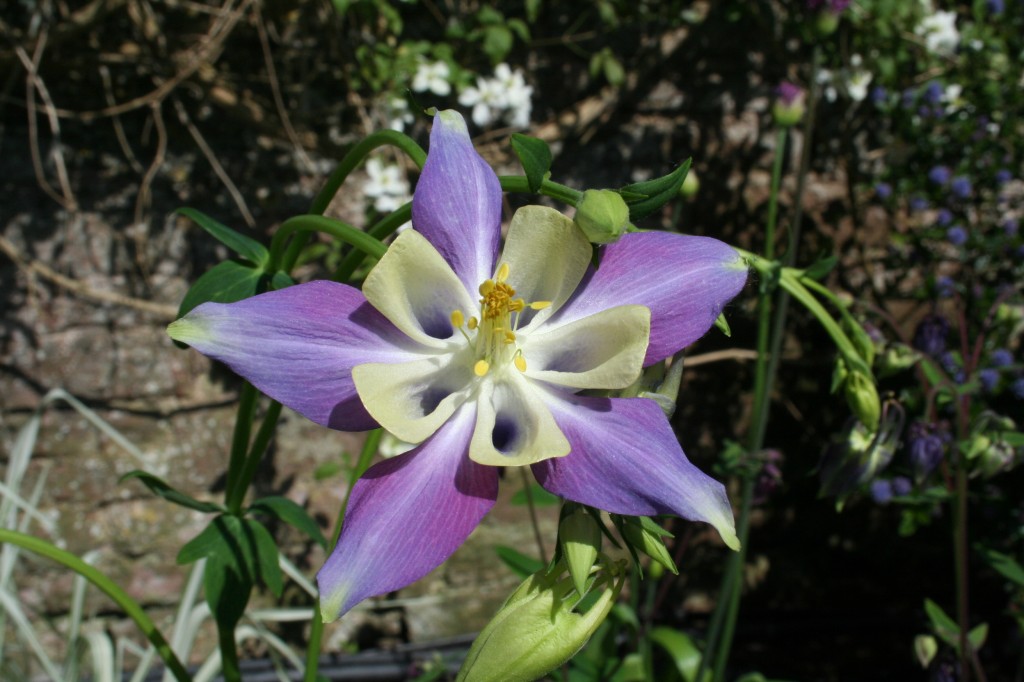 The veg garden is now nearly fully planted – Gail just has some peas and basil and some kale that she is bringing on up in the barn cloakroom where it gets nice and warm throughout the day. Mel planted out the courgette, squash and pumpkin plants in the gap between Manda leaving us and Burgs arriving, and Steve did some major weeding of poppy plants out of the cut flower bed to make room for dahlias and sweet peas. 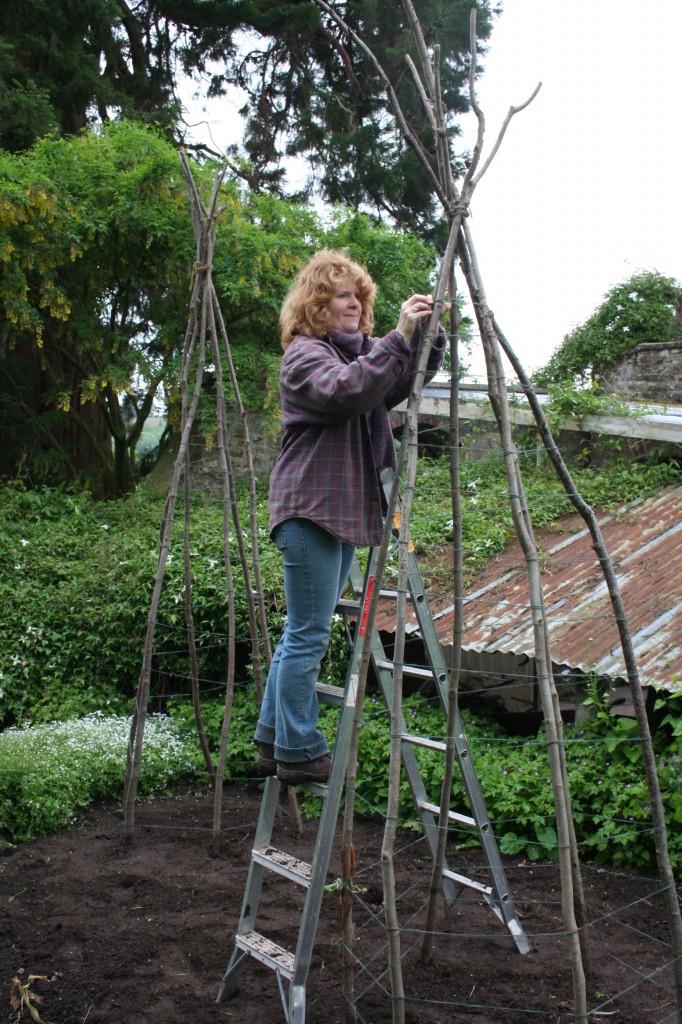 We began making the wigwams for the sweet peas today and will be planting them out with the dahlias over the next few days if the weather isn’t too wet! We’ve had some very nice days all out in the garden together in the short space between courses, joined by robins and blackbirds looking for worms and masses of bees enjoying the pollen on Gail’s green manure (called phacelia – it attracts bees like almost nothing else and is extremely pretty too!). 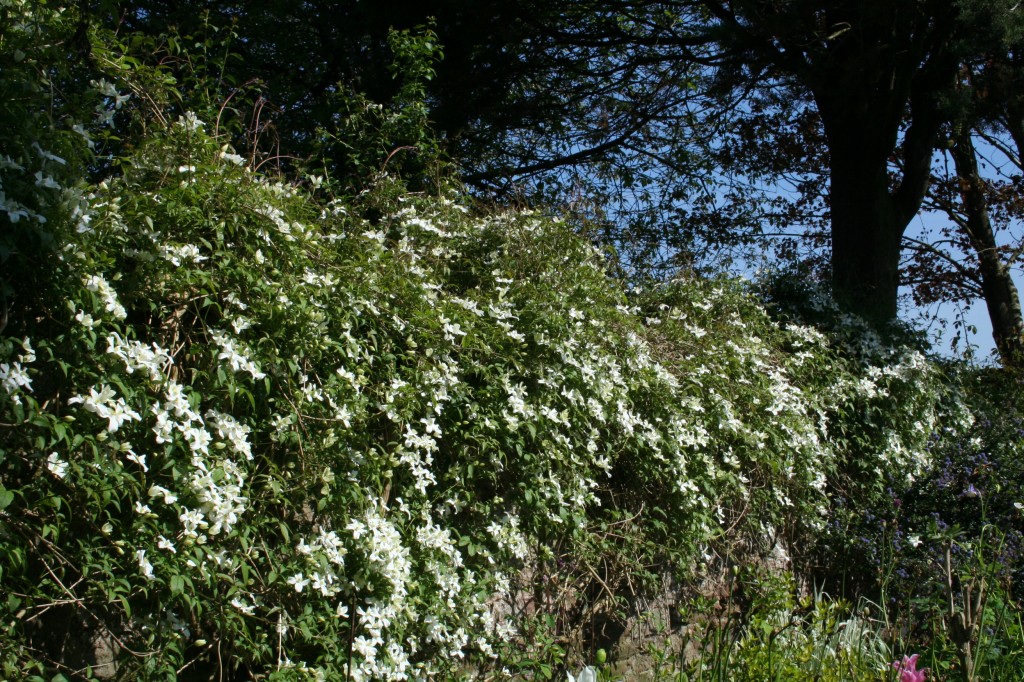 It was like high summer here last week for Burgs’  seven day silent Healing Meditation Retreat .  We were lucky to be able to join this retreat and it was gorgeous between sessions to lie out and doze on the lawn in the sunshine or sit quietly enjoying the hum of the bees in the flower beds or the birds nest-building and catching insects on the wing. Even the first applications of suncream occurred! 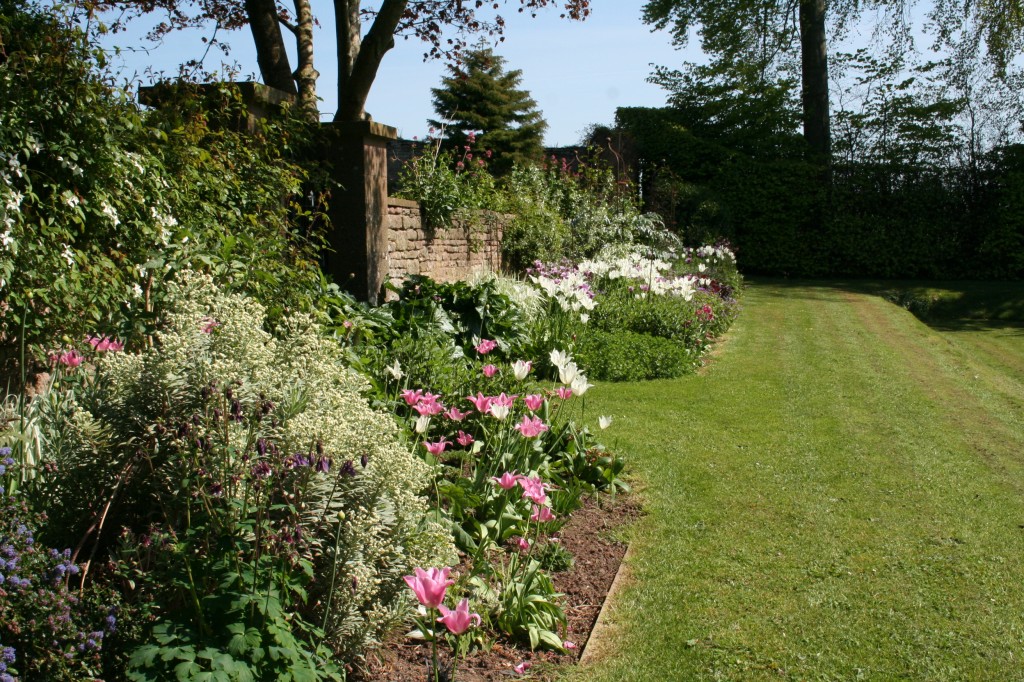 Friends who don’t meditate often ask us why we might want to be silent and “just sit there” all week! There  is often so little space in most people’s lives, with so much pulling on us, that the very idea of being quiet and having that much space for so long seems wierd.  The only break that people get is when they’re asleep! Nearly everyone has felt the urge to have more peace and serenity in their life and so we often answer with something to this effect.

However, the truth is that when we do sit still with ourselves – without a drink or a snack, without a book or the radio, or the TV or daydreaming about the past or planning for the future, (or in many people’s cases these days, without checking their phone!) – it isn’t very peaceful or serene at all!  In fact, what we see immediately is how restless we are, how unable to settle, how the mind is constantly hankering after something to keep it amused and distracted from the moment it’s in. This is not a comfortable revelation!!  Taming the restless mind is not easy and it doesn’t happen over night, but with skilful instruction and by patient repetition in our attempts to concentrate, it begins to happen. We start to access a different reference point, glimpses of peace, of just being able to rest quietly with ourselves and for that to feel enough, to feel complete. When we have access to this feeling of completeness within, then the need for external distraction becomes less, we are less likely to feel bored or need things to be a particular way to feel happy. Gradually a feeling of contentment arises out of this simplicity where we experience the world more spaciously and as a felt experience rather than a collection of ideas. It’s a lifetime’s work, of course, but we start to get the feeling of the freedom that lies ahead.

Because freedom lies not in having to have what we want in order to be happy, but being content regardless of what we have. And without the ability to sit quietly at peace with ourselves, this is often just an idea rather than something that actually starts to happen to us. 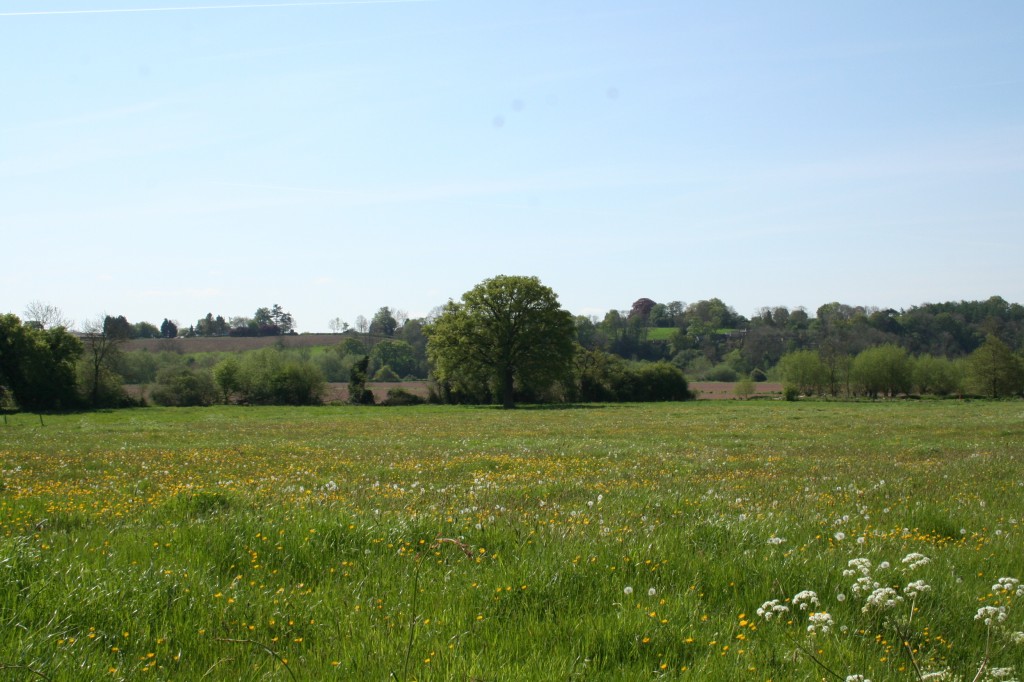 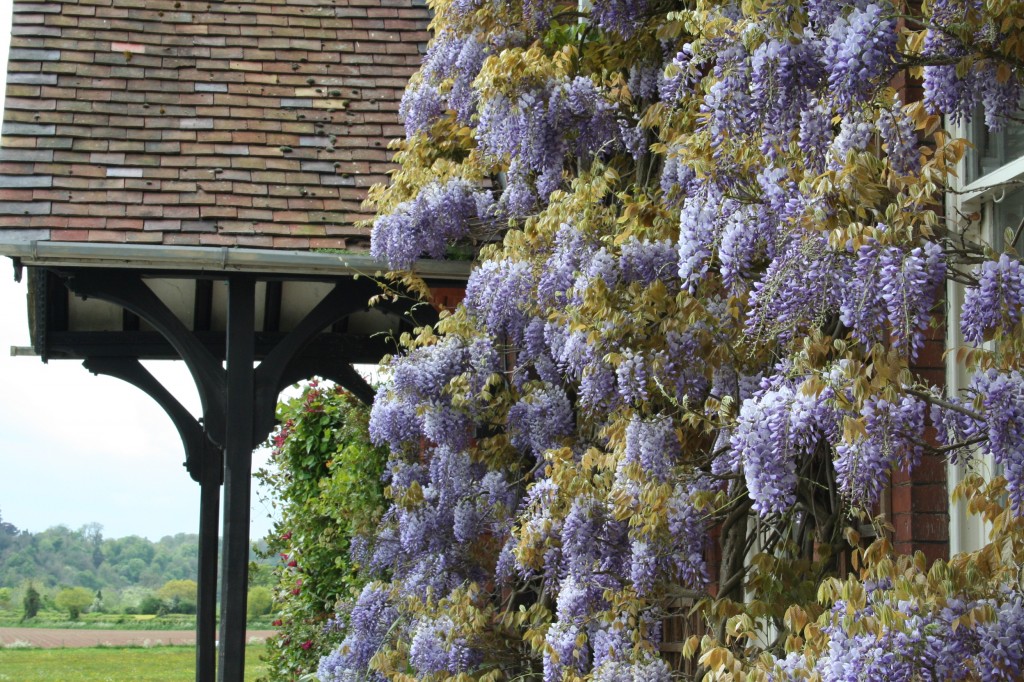 Sorry!  Couldn’t resist that!  The wisteria at the front of the house is looking wonderful right now.  It’s a lovely sight for guests sitting out on the front step in the Spring sunshine having their cups of tea. 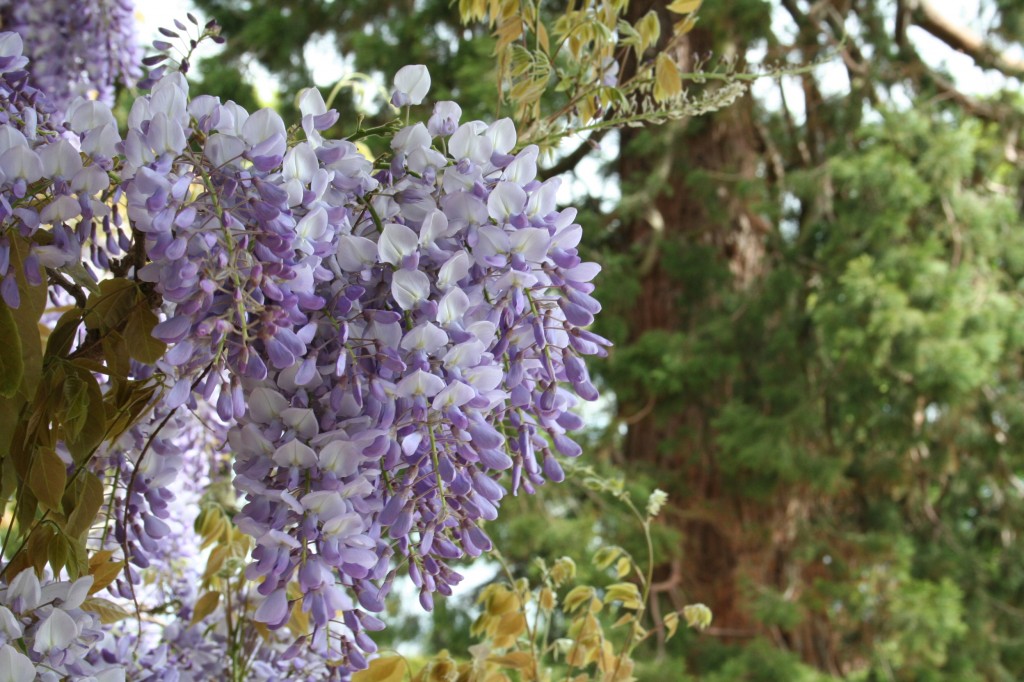 Also, the clematis that we planted to cover the old conservatory at the front is finally maturing after a few years and showing huge dark pink flowers. 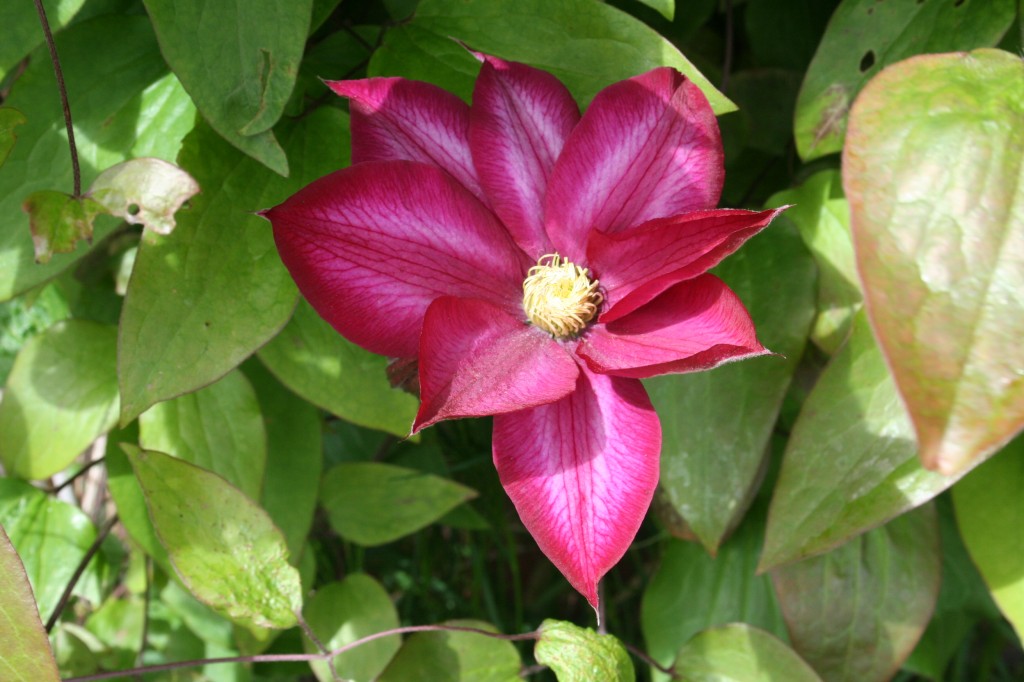 In between showers Steve has been busy trying to manage our beech hedge which has over the decades expanded to an unworkable depth without dangerous goings-on with the electric hedge trimmer!  He’s managed to take alot of growth out from the back so the visual impact is minimal.  We had a pleasant afternoon cutting the debris up into lengths for kindling and use around the garden, surrounded by all spring green-ness of early beech leaves. 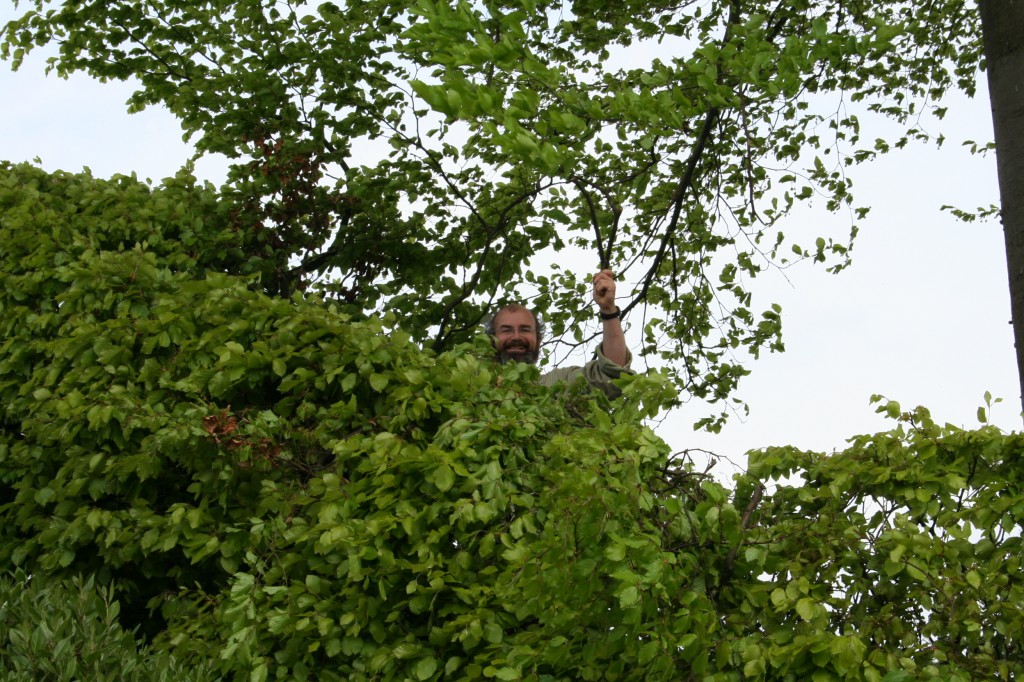 Gail is out and about in the veg garden planting out seedlings and bringing up the muck ready for the squash, pumpkin and courgette plants that are being raised in the old conservatory.  Steve’s been cracking on with the weeding today in a high wind!  It’s been beautifully sunny though most of the day. 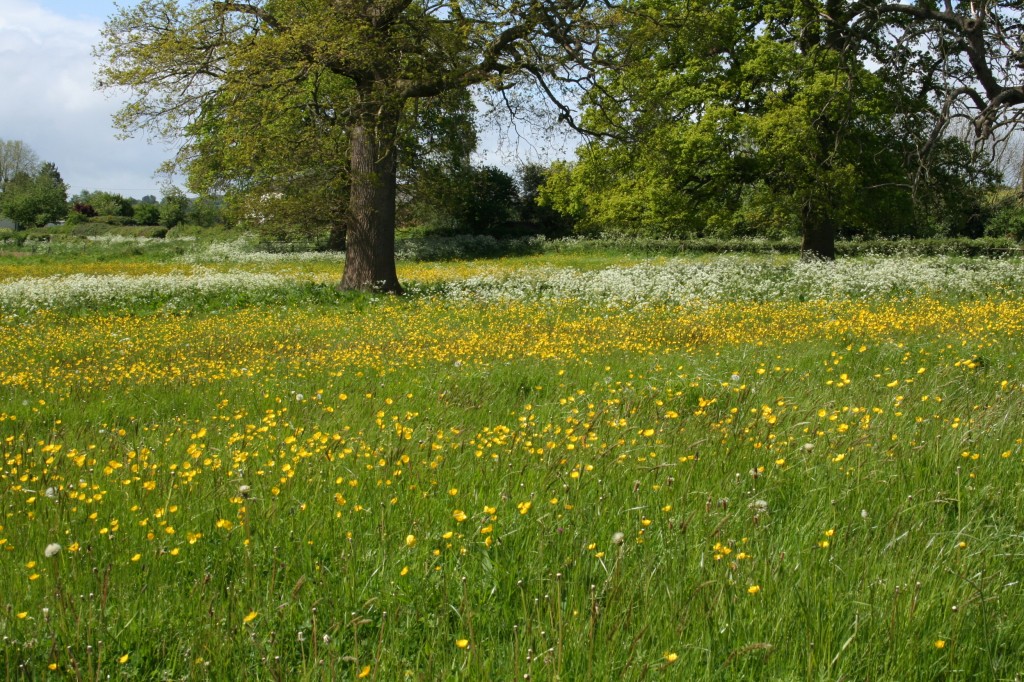 We’ve just said goodbye to Jan Adamson and Desiree Emery’s shamanic group on Sunday and welcomed Manda Scott and her shamanic students on Wednesday evening (http://www.mandascott.co.uk/).  Both these groups are old hands around the house and it’s lovely having them return here year on year.  Manda is also a historian and author of many historical (and other) novels.  The new novel  in her Rome series is now out and you can see details about it and her other works on her website.

Right! time to check on the kitchen before supper! 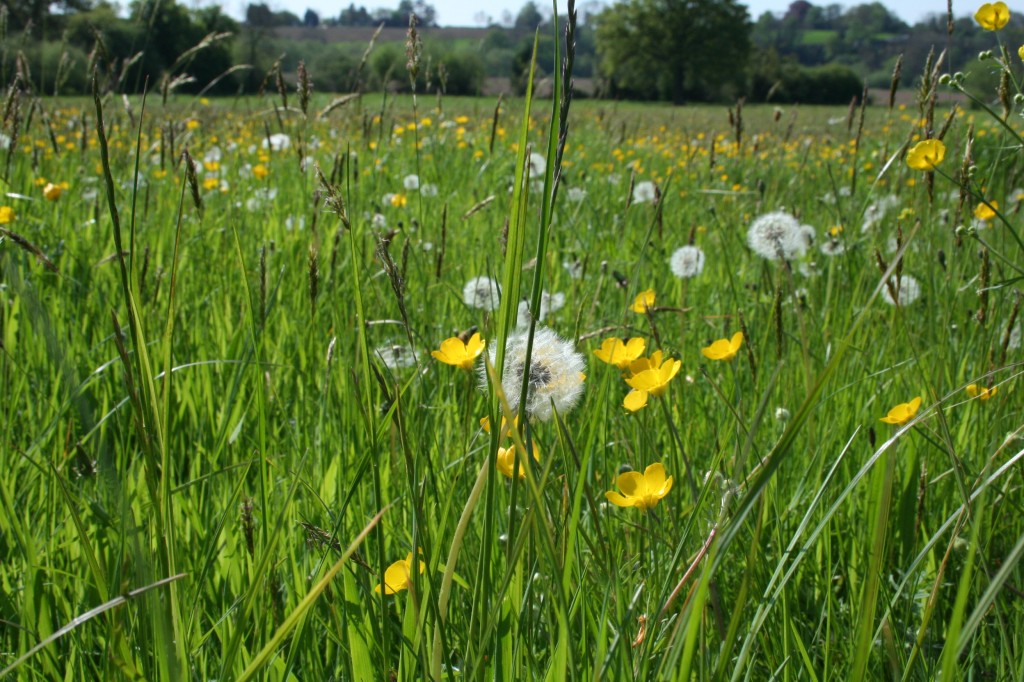 We’re still very much blessed with Spring weather here.  No stock has been put on Poulstone meadow as yet and so it looks beautiful with dandelions and buttercups coming up all over it (we’ll try to remember that when the dandelions start popping up in the garden!). Burgs’ Towards Samadhi retreat was in for seven days and really saw the blossom in the garden at its peak – drifts of petals came down like gentle snowfall against impossibly blue Spring skies.  Very lovely.  The group were able to do their Qi Gong sessions outside and enjoy the gardens during their breaks, walking meditations and rest period. The swallows and martins arrived on the Sunday of that week too, adding their chitter-chattering song to the dawn chorus. 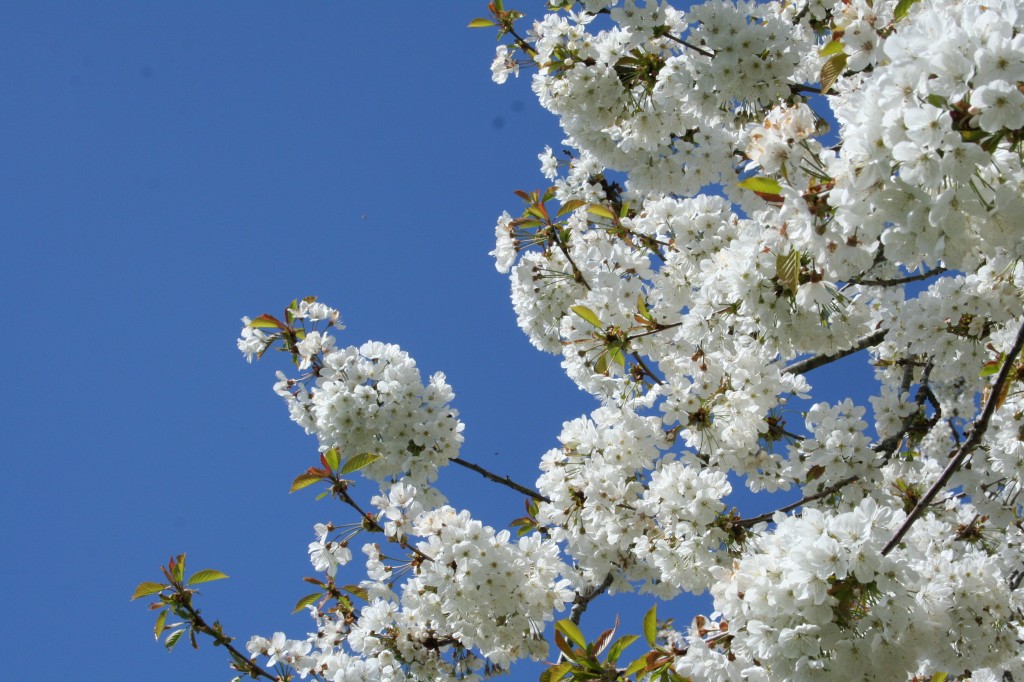 Burgs was followed by Barbara Turner-Vesselago with her annual Freefall Writing course here with us for a week.  Half the group were new to Freefall and Poulstone and many have already asked to sign up again for next year!  The group has a long break after lunch while Barbara studies their daily manuscripts and there was plenty of time for people to go walking and explore the gardens and along the river – or do more writing! Everyone said their writing benefited hugely from the week and Barbara’s expertise and the support of the group. 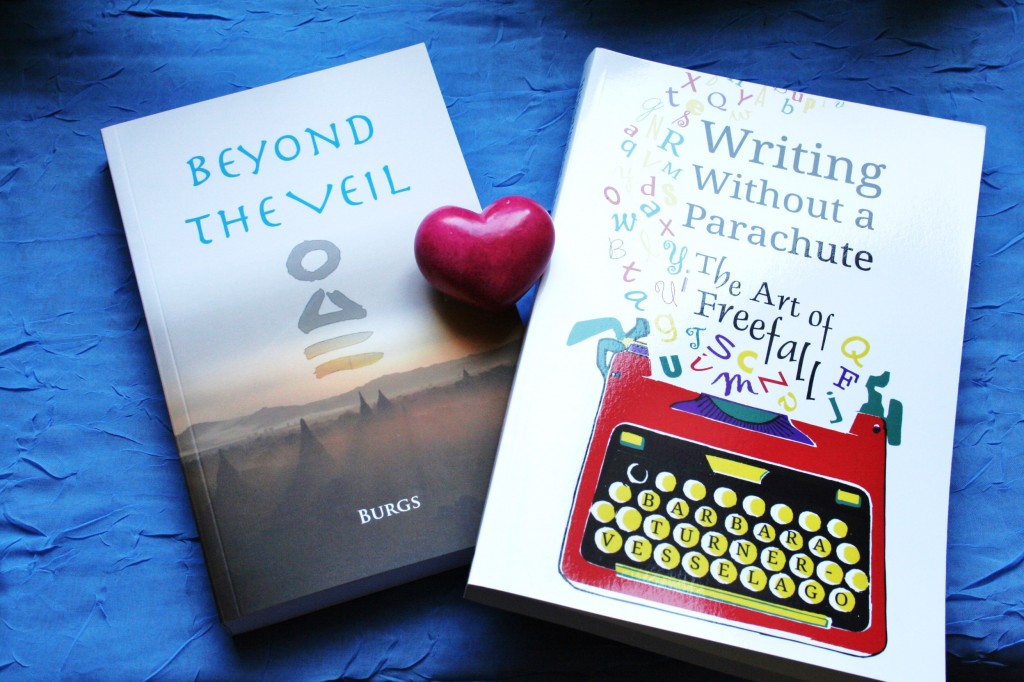 We stock both Barbara and Burgs’ books in the shop and are giving away some free copies.  We have two copies of  Barbara’s “Writing without a Parachute: The Art of Freefall” **and five copies of Burg’s “Beyond the Veil” book to give away as gifts. 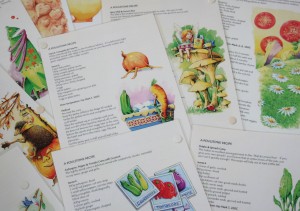 We also sold a lot of recipe cards during Freefall for the newer dishes in the Poulstone repertoire and are giving away five sets of the illustrated recipe sheets (unlaminated in a plastic wallet). To claim a free gift, all you have to do is email the name of your choice of gift (one per person) and your full postal address to info@poulstone.com together with the answer to this question: what type of tree grows in the new Japanese style stone garden at Poulstone? The first emails received will be sent the gifts. Good luck!!!

**please note, for Freefall gifts, we will add your email address to the Freefall once-a-year mailing list unless you ask us not to**