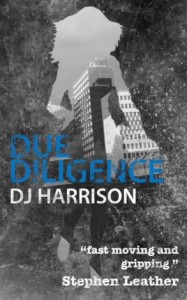 The Freefall writing students have departed and were very enthusiastic about what they have learnt and experienced over the week with Barbara.  (Barbara Turner-Vesselago – www.freefallwriting.com).  The first thing people ask us when we mention Freefall is whether anyone gets published as a result of writing using this method.  The answer is simply “yes”!  Many people just come and write for pleasure but others do get published.  David Harrison who was on the course last week is the latest published author.

Dave was an aspiring writer when he first came to Freefall in 2008. This year, he published his first novel, Due Diligence, a crime thriller set in Manchester.

Dave says he acknowledges the massive contribution made to his writing by the Freefall process and by the supportive environment at Poulstone. He’s been back every year since 2008 and has already booked his place for 2014!

If you want to see the results of all this good work, check out Due Diligence at http://www.amazon.co.uk/Due-Diligence-Jenny-Parker-ebook/dp/B00BU815XC/